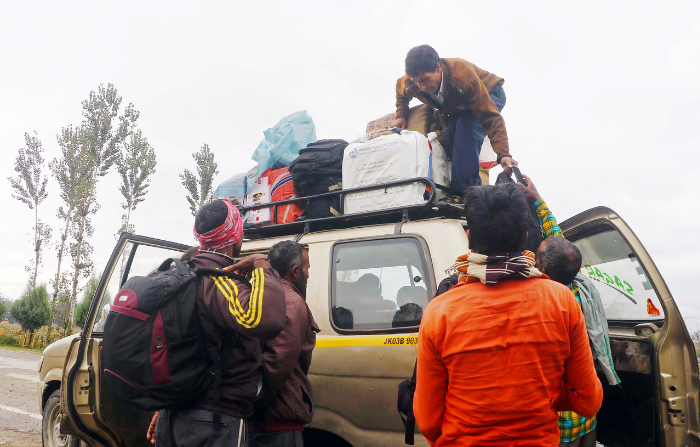 Migrant labourers pack their belongings while leaving for their native places amid rising violence against them in Kashmir Valley. (ANI Photo)

THE spate of killings of civilians, including migrant labourers, in Kashmir has left them in deep fear and while many have sought safety from Jammu and Kashmir Police, scores have decided to leave the state.

Indian home minister Amit Shah has chaired a meeting in New Delhi with top police and paramilitary officers from across India on Monday where a range of security issues, including the murder of civilians, were discussed. The chief minister of the eastern state of Bihar, Nitish Kumar, has also expressed concern over the attacks on the migrant workers from the state in Kashmir saying “people who have gone for work are being deliberately targeted in J&K”. He also said that he had spoken to Jammu and said he had spoken to J&K Lieutenant Governor Manoj Sinha on the matter.

Press Trust of India reported that Kumar, whose Janata Dal (United) is an ally to prime minister Narendra Modi’s Bharatiya Janata Party, announced an ex gratia of Rupees 2 lakh (1,930) for the kin of the labourers from Bihar who have been gunned down by the militants in Jammu and Kashmir and hoped that the local administration would take the required steps to protect them.

In Srinagar, the summer capital of the union territory, labourers were found making beeline for the local Nowgam railway station to leave the state. Many of them have been earning livelihoods in Jammu and Kashmir for years now but felt compelled to leave as growing militancy has threatened the region.

Every year, an estimated three-four lakh migrant workers reach the Valley from states like Bihar, Uttar Pradesh, Rajasthan and Punjab to work throughout the year and return home during the winter. They have better earning prospects in Kashmir compared to their native states but with lives now lying defenceless against bullets, they have been left distraught.

Many, however, are optimistic that the situation would improve fast and think returning to the home state is not a realistic option.