Modi Gets Election Boost With UN Sanction Against Masood Azhar 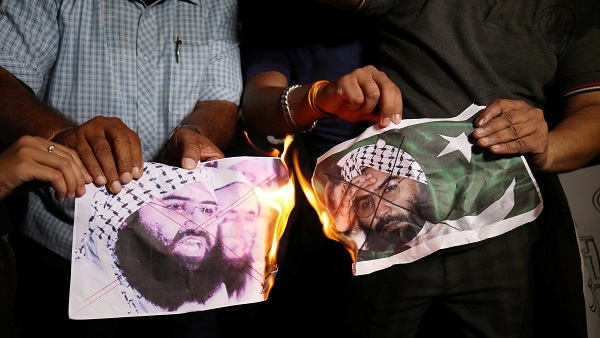 People burn pictures of Masood Azhar, the head of a Pakistan-based militant group Jaish-e-Mohammad, as they celebrate the UN Security Council committee’s decision to blacklist Azhar, in Ahmedabad, India May 1, 2019 (Photo: REUTERS/Amit Dave).

JeM was also blamed for a high-profile attack on India’s parliament in 2001, and local media often calls Azhar the country’s enemy number one.

In response to the suicide attack in Kashmir, which is also claimed by Pakistan, Modi sent warplanes into the nuclear-armed neighbour to bomb what New Delhi called a militant camp.

Modi has since made national security the main plank in the country’s 39-day general election that began on April 11. Results will be out on May 23, and political analysts said the news on Azhar will further energise the massive cadre of Modi’s Bharatiya Janata Party (BJP).

“The world can’t anymore ignore the voice of 1.3 billion Indians,” Modi said at an election rally, calling the UN decision a great diplomatic victory for the country. “This is only a beginning.”

China, regarded by Pakistan as its most reliable friend, had repeatedly thwarted efforts to implement UN sanctions against Azhar, who founded JeM in 2000 after being released from an Indian prison in exchange for 155 hostages from a hijacked Indian Airlines plane.

Beijing said on Wednesday (1) it had no objections to Azhar’s listing after studying revised proposals at the UN.

The BJP, political analysts and even the main opposition Congress party acknowledged that getting Azhar on the list, which places a travel ban and an asset freeze on him, was a big victory for India and its diplomacy.

“The move will offer an electoral boost for Modi,” said Michael Kugelman, deputy director of the Asia Program and Senior Associate for South Asia at the Wilson Center in Washington DC.

“He can argue that his government’s many years of efforts have finally paid off and delivered a major victory against terror and a major defeat for Pakistan.”

Political strategists said the Azhar issue could further help the BJP to deflect opposition criticism focused on a shortage of jobs and weak farm prices.

Some Twitter users hit out quickly at Congress president Rahul Gandhi for mocking Modi when China last rejected a move to ban Azhar in March.

China’s position then was seen as a failure of Modi’s attempts to improve ties with its bigger neighbour despite his multiple meetings with Xi.

Maidul Islam, a professor of political science at Kolkata’s Centre for Studies in Social Sciences, said the listing, coming soon after the Easter Sunday bombings in Sri Lanka that killed more than 250 people, would help Modi keep the focus on national security in the remaining rounds of the seven-phase election.

“Three stages are still left and there are crucial states: Uttar Pradesh, Bihar and West Bengal,” Islam said, referring to states that together account for about 30 per cent of the 545 seats in the lower house of parliament.

“Azhar will become an additional talking point. On-farm distress and unemployment they have nothing to say, but with all these things, they might only campaign on national security.”