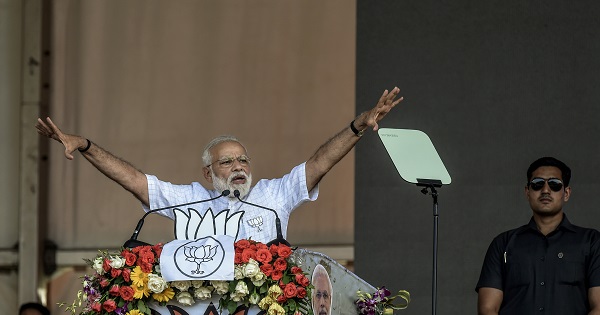 “People of Delhi have been fooled by a bunch of no-gooders who promised a new kind of politics. But they have become synonymous with anarchy and obstructionism,” Modi said (Photo: Atul Loke/ Getty Images).

“When work is done with good intentions, it also yields results. Inflation used to be on a rise, it is now under control,” Modi told the crowd of several tens of thousands.

“The poor have access to houses, toilets, electricity and are being given benefits of Ayushman Bharat (a free health scheme),” Modi thundered.

The world’s biggest election with 900 million voters began on April 11, and on Sunday it is Delhi’s turn to cast ballots on the penultimate voting day of seven before the event ends on May 19.

Being the capital, the heavily polluted metropolis and the city state of some 20 million people is a hard-fought and important electoral prize.

Modi’s Bharatiya Janata Party (BJP) won all seven Delhi parliamentary seats in 2014 and hopes to fend off a mounting challenge from the Congress Party and local upstart the Aam Aadmi Party (AAP).

The AAP, formed on an anti-corruption plank in 2012, stormed to power in Delhi in state elections in 2015 under its charismatic but polarising leader, Arvind Kejriwal.

But Modi told the crowd of children in Modi masks, women in saris and young party cadres in orange BJP hats plus the occasional person in a Hindu deity costume not to be fooled.

“People of Delhi have been fooled by a bunch of no-gooders who promised a new kind of politics. But they have become synonymous with anarchy and obstructionism,” Modi said.

“Modi is the only leader who thinks about us Hindus. He is our pride. He is the only saviour of Hindus,” Bibha Sandwar, a school principal, 50, said.

“If he does not come to power, India will become like Pakistan, only Muslims will be heard and seen,” Sandwar said at the rally grounds, which adjoin a large mosque.

Opinion polls suggest Modi will be re-elected, but likely with a reduced majority, and is vulnerable to opposition attacks on the economy and unemployment.

Munish, 41, a businessman at Wednesday’s (8) rally, said that Modi had cracked down on the shadow economy and “replaced black money with white money.”

“I think there a lot of jobs, not in the public sector but in the private sector. People are just not willing to work,” he said.

“We have focused on making the lives of the middle class in Delhi easier,” Modi told the rally.

“Be it ensuring easier and cheaper housing, cheaper bills for mobile phones and medicines or exempting income up to Rs 500,000 ($7,175) per year from tax net, they have been at the core of our governance,” he said.