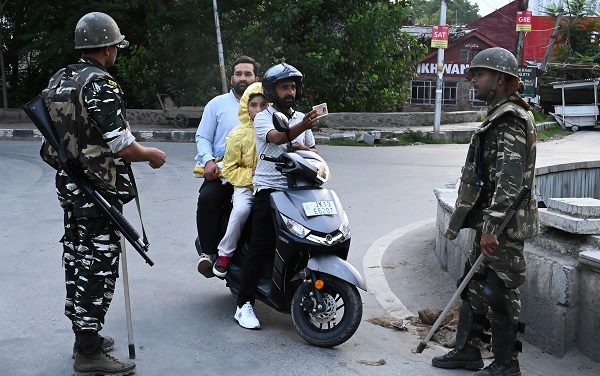 Restrictions in Jammu, the more peaceful Hindu-majority area, have already been lifted, and in the Kashmir Valley, the main hotbed of resistance to Indian rule, there has now been some easing too, senior police officer Munir Khan said (Photo: TAUSEEF MUSTAFA/AFP/Getty Images).

INDIA has eased some restrictions on movement in Kashmir but phones and the internet remained cut off for a 12th day on Friday (16), a police official in Kashmir said.

With the federal government fearing protests and unrest, Kashmir has been under lockdown since August 4, a day before New Delhi stripped the region of its autonomy.

Tens of thousands of extra troops have been deployed -joining 500,000 already there turning parts of the main city of Srinagar into a fortress of roadblocks and barbed wire.

Restrictions in Jammu, the more peaceful Hindu-majority area, have already been lifted, and in the Kashmir Valley, the main hotbed of resistance to Indian rule, there has now been some easing too, senior police officer Munir Khan said.

But he said that Srinigar’s Jama Masjid, the main mosque in the Muslim-majority region with space for thousands of worshippers, also remained shut for Friday prayers.

“You need to understand that restrictions and relaxations are area-wise. You can’t generalise them,” Khan added.

The Press Trust of India quoted an unnamed official as saying that authorities were considering allowing schools to open in the Valley next week.

“We are making arrangements that all government offices start functioning normally from Monday (19),” the official said.

“Even if the telephone services are to be restored, it will be done in a phased manner,” the official added, however.

Despite the crackdown, last Friday (9) residents said some 8,000 people took to the streets and that the military used pellet-firing shotguns.

The Indian government confirmed the clashes only after several days had passed, blaming them on stone-throwing “miscreants” and saying its forces reacted with “restraint”.

There was also a smaller demonstration on Monday (12) and there have been reports of others.

Kashmiri politicians alongside university professors, business leaders and activists are among the more than 500 people that have been taken into custody.

Officials in the Pakistan Occupied Kashmir (POK) said Thursday (15) that three soldiers died in Indian shelling across the Line of Control, the de facto border, and two others were killed in a separate incident.

In a rare step, the UN Security Council will discuss the situation behind closed doors later on Friday, diplomats said.