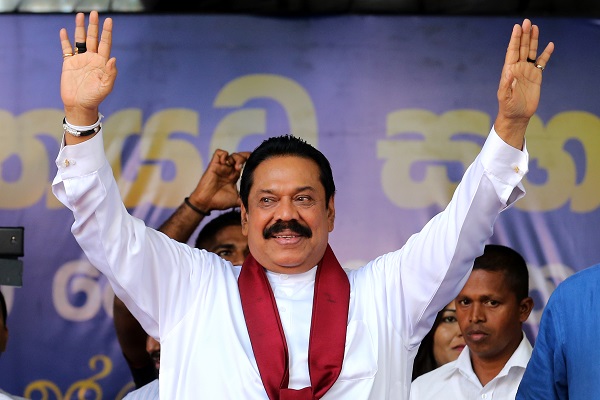 Elections to pick a new president are due between October and December and Mahinda Rajapaksa is already targeting president Maithripala Sirisena and his prime minister Ranil Wickremesinghe for failing to preserve the hard fought peace (Photo: Buddhika Weerasinghe/Getty Images).

SRI LANKA’S former president Mahinda Rajapaksa and his brother, then the defence secretary, crushed Tamil Tiger separatists with such ferocity ten years ago that Western powers sought war crime trials against them and greeted their defeat in elections later with barely concealed glee.

But now the tiny Indian Ocean island is faced with South Asia’s deadliest militant attack claimed by Islamic State and may well again turn to the Rajapaksas for a strong-willed response to the new threat, politicians and diplomats say.

Elections to pick a new president are due between October and December and Mahinda Rajapaksa is already targeting president Maithripala Sirisena and his prime minister Ranil Wickremesinghe for failing to preserve the hard fought peace.

Rajapaksa cannot contest for president again, but his brother Gotabaya is ready to make a bid, his aide has said.

“Rajapaksas’ will take the easy benefit and be able to claim with some credibility that if they come back to power, they will adopt the same strong security policy that allowed them to free the country from terrorism,” said a Western diplomat.

At the same time, the island nation better known for its beaches, jungles, and tea plantations, has gained in geopolitical importance, becoming an arena for influence peddling between India, its traditional partner, and China, which has invested billions of dollars in infrastructure.

With Islamic State claiming responsibility for the Easter Sunday attacks in which more than 350 people were killed, Sri Lanka has been thrust further into the global limelight.

Rajapaksa and his supporters say that the government under foreign pressure has been weakening the military and intelligence arms he had built up to ensure there was no revival of the Tamil movement, but also keep an eye on disaffected minorities.

Instead, the government has spent its energy investigating old allegations of abuse against soldiers stemming from the 26-year civil war against the Tamil separatists.

“Because the government was engaged in relentlessly persecuting its own armed forces, we became an easy target for terrorists,” Rajapaksa said in parliament this week.

“No other country has persecuted and weakened their own armed forces and intelligence services in this manner. Terrorists observe these things and plan accordingly,” he said.

The government said it had received prior warnings about impending attacks on churches but these were not shared across the government and admitted that was a lapse.

A source in the Indian government, which provided three warnings ahead of the Sunday bombings, said Sri Lanka no longer had the sophisticated national security apparatus that the former defence secretary Gotabaya Rajapaksa ran.

Out in the east, home to the suspected mastermind of the attacks, there was a 45-member cell of intelligence operatives that had been wound up, said Kehelia Rambukwella, a spokesman for Rajapaksa’s party.

“Some of its people had been sent to the welfare department. If you had them still functioning, we might have picked this plot up,” he said.

But government officials said many of these secret intelligence cells were disbanded because they faced allegations of abuse, including torture and extra judicial killings, during the war and in the months afterwards, officials said.

Gotabaya is himself facing lawsuits in the US where he is a dual citizen.

The South Africa-based International Truth and Justice Project, in partnership with the US law firm Hausfeld, filed a civil case in California this month against Gotabaya on behalf of a Tamil torture survivor.

In a separate case, Ahimsa Wickrematunga, the daughter of murdered investigative editor Lasantha Wickrematunga, filed a complaint for damages in the same US District Court in California for allegedly instigating and authorising the extrajudicial killing of her father.

Gotabaya has denied the allegations and said these were timed to thwart his possible presidential run.

For the Sinhalese nationalists who fully backed the measures against the Tamil separatists, the new attacks have already fuelled calls for strong leadership.

Political differences between president Sirisena and his premier, Wickremesinghe, have presented a picture of a government in drift and an economy vastly under performing.

Both sides have said they were not aware of the intelligence that was provided by India about the attacks, prompting questions about who was in command.

The worry is that the election campaign, now months away, could turn into a contest on who is tougher on Islamist militancy and in that the country’s largely peaceful Muslim community would be under pressure, said political commentator Kusal Perera.

“The post-attack situation is going to create a demand for Rajapaksas because Sinhala Buddhist nationalists are going to say they need a dictator or a strong leader who can handle the national security threats,” he said.

Earlier the country’s Tamil minority were the targets, but now in the aftermath of the attacks carried out by suicide bombers who have been identified as well-educated local Muslims, the community could face the heat in the elections.