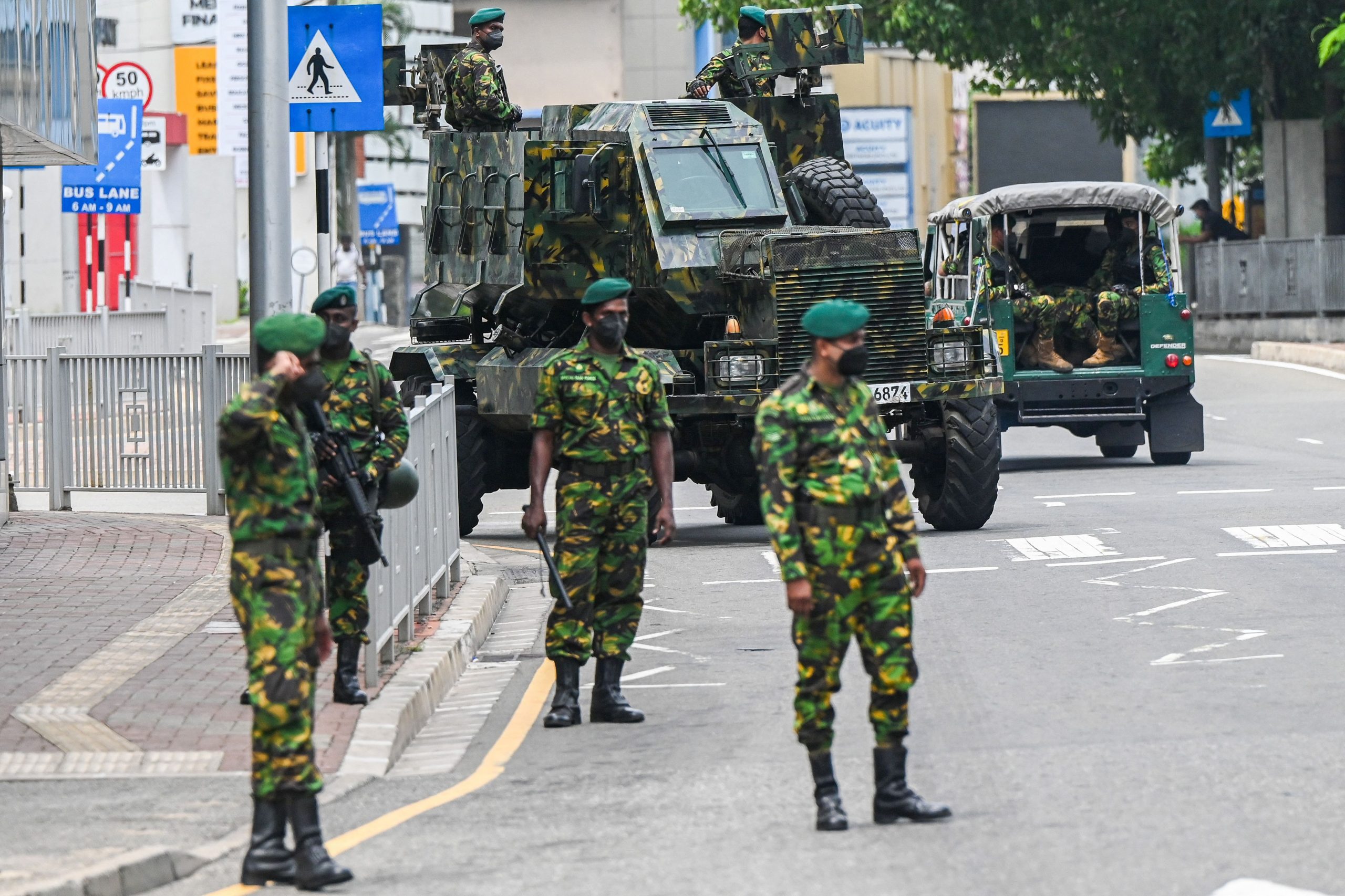 Sri Lanka’s economy will “collapse” unless a new government is urgently appointed, the central bank chief warned Wednesday, as security forces fanned out on the streets to restore order after spasms of mob violence.

Police say nine people have died since Monday, when frustration at a dire economic crisis erupted into clashes between backers and opponents of President Gotabaya Rajapaksa, injuring more than 200.

Armoured personnel carriers have carried troops into the capital Colombo and a heavy security presence commanded to shoot looters on sight has largely restored order without sparking further violence.

But Central Bank Governor Nandalal Weerasinghe said it was critical that a new administration take charge by Friday or the country would suffer a catastrophe.

“The economy will completely collapse and no one will be able to save it,” he told reporters.

“The country was fast going down a slope when I took over just over a month ago. I thought we were able to apply the brakes, but with events of Monday the brakes no longer work.”

Shortly after taking over as the bank’s chief in April, Weerasinghe announced a default on Sri Lanka’s $51 billion external debt, saying the country had no money to pay its creditors.

He said political stability was vital to implement the reforms needed to address Sri Lanka’s snowballing debt crisis and the acute shortage of foreign exchange to import essentials.

A nationwide curfew is still in effect and the streets of the capital Colombo were almost deserted on Wednesday aside from soldiers manning checkpoints.

Several roads were still partially blocked by the charred remains of buses that had been set alight by anti-government crowds.

“Don’t ever think that we are trying to capture power,” said Kamal Gunaratne, the secretary of the defence ministry.

“The military has no such intentions.”

A small crowd continued to defy the curfew near President Rajapaksa’s seafront office, where a protest camp has for the past month maintained a vigil calling on him to step down.

“We want the whole Rajapaksa clan out because they are so, so corrupt. They have been eating into Sri Lanka like a caterpillar eating into some fruit,” activist Kaushalya Fernando told AFP.

In a televised address to the nation, Rajapaksa said he was willing to curtail his own powers in the interests of forming a unity government to navigate Sri Lanka out of the crisis.

“I appeal to all to support me to ensure that the country does not collapse and we are able to prove the essentials to all,” he said.

But the main opposition SJB party reiterated it will not be a part of any government with Rajapaksa still president, even after his brother Mahinda’s resignation as prime minister on Monday.

Sri Lankans have been suffering shortages of essential goods, fuel and medicines for months in the island’s worst economic downturn since independence in 1948.

The crisis moved into a darker phase on Monday when government supporters with sticks and clubs attacked demonstrators who had been protesting peacefully for weeks demanding the president’s resignation.

Mobs then retaliated across the country, torching dozens of homes of ruling-party politicians.

Mahinda Rajapaksa had to be rescued in a pre-dawn military operation on Tuesday and taken to a naval dockyard for safety after protesters tried to storm his official residence.

Echoing the UN rights chief and the European Union, the United States on Tuesday said it was concerned both with the violence and the deployment of the military.

“We stress that peaceful protesters should never be subjected to violence or intimidation,” State Department spokesman Ned Price told reporters.

India meanwhile was forced to deny social media rumours — some using old images of Mahinda boarding a helicopter — that it was helping Rajapaksa family members to flee.

The Indian “High Commission would like to categorically deny speculative reports in sections of media and social media about India sending her troops to Sri Lanka,” it said a statement.

With vital tourism revenues torpedoed by the pandemic, Sri Lanka last month defaulted on its foreign debt, some of it stemming from Rajapaksa vanity projects built with Chinese loans.

The International Monetary Fund this week began a “virtual mission” of staff-level talks on a possible bailout.

IMF mission chief Masahiro Nozaki said the lender aimed to be “fully prepared for policy discussions once a new government has been formed”.