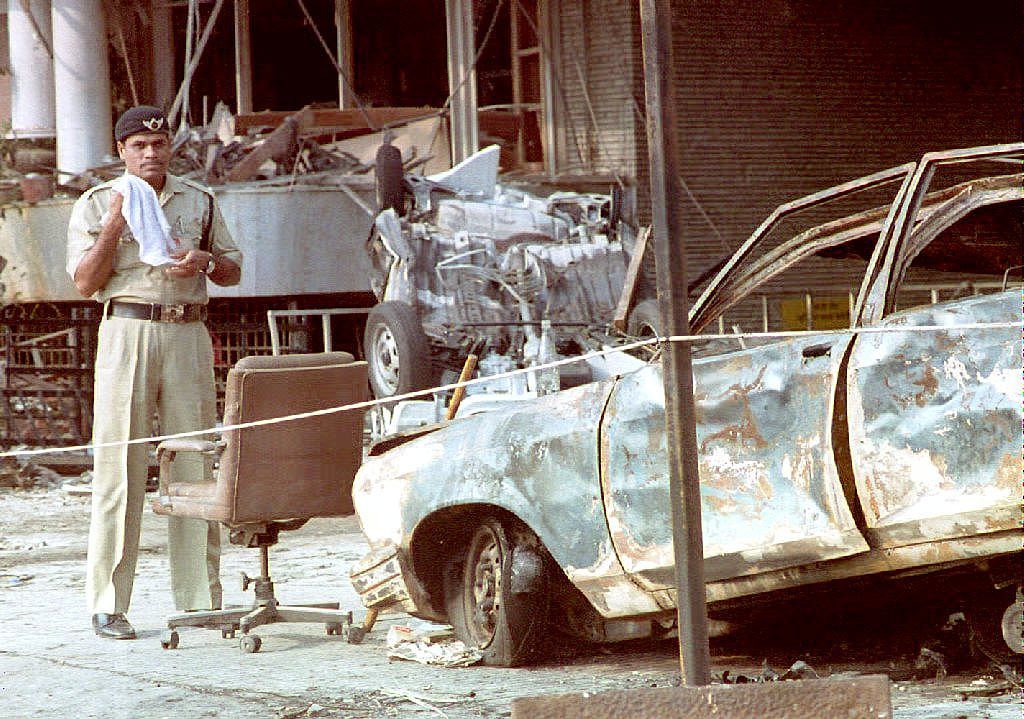 A police officer stands beside a charred automobile outside the Air India building 13 March 1993, one day after a series of bombs exploded in India’s financial capital. (Photo by DOUGLAS E. CURRAN/AFP via Getty Images)

THE crime syndicate which is responsible for the serial blasts in Mumbai in 1993 are enjoying five-star hospitality in Pakistan and given state protection, the Indian envoy at the United Nations has said in a veiled dig at D-company chief Dawood Ibrahim.

“We have seen the crime syndicate responsible for the 1993 Mumbai bomb blasts not just given state protection but are enjoying 5-star hospitality,” he said.

Tirumurti’s remarks were a thinly veiled reference to D-Company and Ibrahim, who is believed to be hiding in Pakistan.

In August 2020, Pakistan had for the first time acknowledged Ibrahim’s presence on its soil after the government imposed sweeping sanctions on 88 banned terror outfits and their leaders, which also included the name of the underworld don sought by India.

Tirumurti, who is the chair of the UN Security Council Counter-terrorism Committee for 2022, said the UN sanctions regimes, including the 1267 Al-Qaida Sanctions Committee, are pivotal to the international efforts in preventing terror-financing, terrorist-travel and access to arms by the terrorist groups.

He voiced concern that the implementation of these measures remains challenging.

“It is critical that all sanctions regimes established by the council ensure due process in their working procedures and decision-making. The decision-making process and listing/delisting measures should be objective, swift, credible, evidence-based and transparent, and not for political and religious considerations,” the Indian envoy said.

He also said that a recent report of the monitoring team on the asset-freeze exemption procedures pursuant to resolution 2560 (2020) points to the lacunae of asset freeze measures by member states, partly because of deficiencies in the committee’s existing guidelines.

The blasts took place at several places in the then Bombay on March 12, 1993, resulting in deaths of over 250 people and injuries to 1,400. Besides the Bombay Stock Exchange, a number of other public places were targeted, making them the worst attacks till those in 2008.