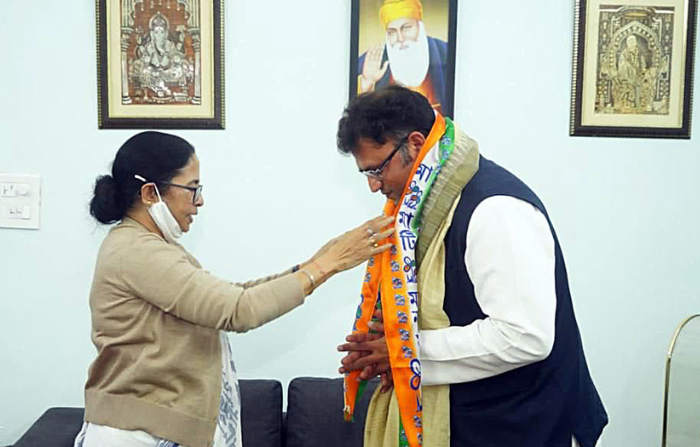 MAMATA Banerjee, the chief minister of the eastern Indian state of West Bengal and a major anti-Narendra Modi face in Indian politics who is aiming to expand her Trinamool Congress’s base across India before the 2024 general elections to throw a major challenge to the incumbent prime minister, received a major boost on Tuesday (23) when a number of leaders joined her party in her presence in New Delhi.

Banerjee welcomed former Indian National Congress leaders Kirti Azad and Ashok Tanwar in her party along with former Janata Dal (United) parliamentarian Pavan Verma. Azad, a former India cricketer and member of the Lok Sabha, was earlier in the Bharatiya Janata Party but joined the Congress in February 2019 after facing a suspension in the saffron party after targeting late finance minister Arun Jaitley over alleged irregularities and corruption.

Today was a very special day for the Trinamool Congress family!

Our Chairperson @MamataOfficial briefly interacts with everyone who joined us to strengthen the fight against all autocratic forces. pic.twitter.com/477OLfQb9J

Tanwar, also a former Congress parliamentarian who led that party in the northern state of Haryana, also joined the TMC. He quit the grand-old party days ahead of the Haryana assembly elections in October 2019 after he was replaced and denied ticket for the assembly elections. Earlier this year, he set up his own Apna Bharat Morcha.
On the occasion, Banerjee said her party would soon start working in Haryana and indicated that it might even contest the next assembly elections in that state which is currently under the BJP’s rule.

Glad to be part of @AITCofficial. Indian politics is at a rare crossroads today – on one hand we're witnessing triumph of optics, on other, tragedies of the marginalized and poor continue. The real issues are getting buried – we need a new politics to turn the tide! pic.twitter.com/llLwadtydD

“The TMC family is complete. Ashok Tanwar is not alone. I have told him to begin work and he will visit both Kolkata and Goa. He will go to Haryana and travel the State. We have to all work together,” Banerjee, who recently welcomed a former Congress leader Luizinho Faleiro and ace India tennis player Leander Paes in her party in the state of Goa, told reporters.

Azad, who lost in the 2019 general election which he fought on the Congress’s ticket, was present on the occasion with his family. He said, “I will work under the leadership of Mamata Banerjee. Will start working on the field. The BJP’s politics is divisive and we will fight it. Today a personality like her is needed in the country who can show the country the right direction.”

Joint ⁦@AITCofficial⁩ along with my wife and son. Didi, as usual was down to earth and we shared nostalgic memories.
⁦@derekobrienmp⁩ and @Abhishekaitc were very hospitable. pic.twitter.com/LkoQ5eJMrb

Verma, a former adviser to Bihar chief minister Nitish Kumar who was expelled from the party last year, said, “Looking at the current political circumstances and the potential in Mamata Banerjee, I have today joined the TMC.”

Banerjee is in the national capital where he will meet Modi on Wednesday (24). She thanked to all the leaders who joined her party saying, “I am thankful to you all for supporting me in this fight to defeat the BJP.”

The TMC humbled the BJP in the assembly election in Bengal earlier this year and since then, the party has aggressively pursued its national ambitions to see Banerjee emerging as the main challenger to Modi, a popular leader, in the 2024 general elections, replacing the Congress, the only other truly pan-India party besides the BJP.