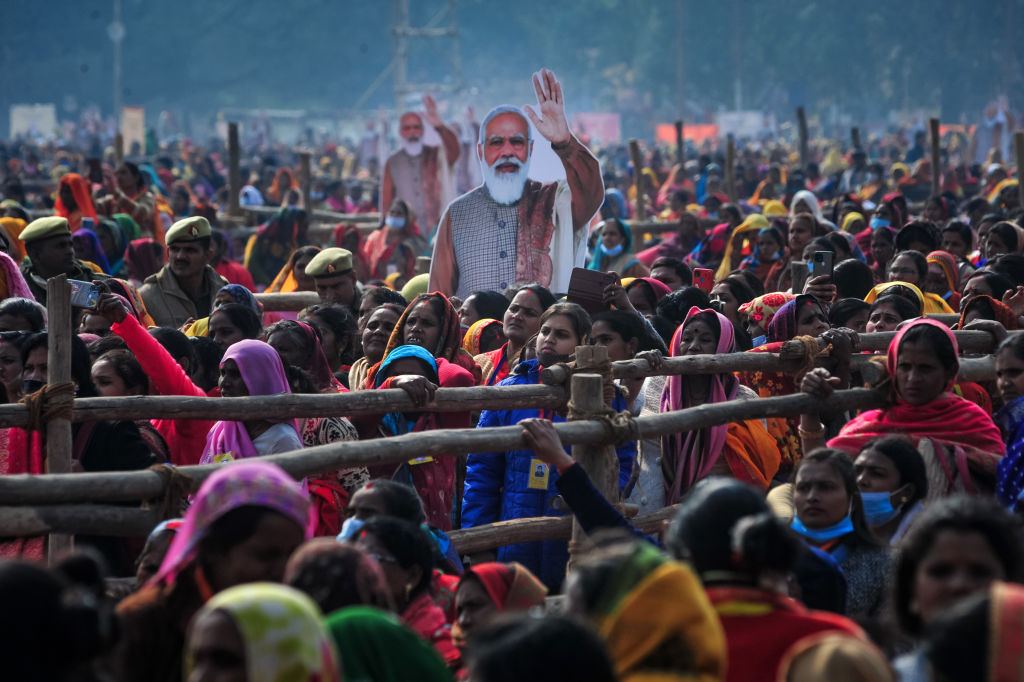 Women from various districts are seen near cut-outs of Indian PM Narendra Modi at a rally on December 21, 2021 in Prayagraj, Uttar Pradesh, India. (Photo by Ritesh Shukla/Getty Images)

Women’s rapid empowerment is a key element in the Indian context, where women make up almost 50 per cent of the population and make up more than 60 per cent of the labour force, in order to achieve gender equality, when men and women have equal authority and access to opportunities for education, economic activities, media, healthcare, self-growth, etc.

The present administration, led by prime minister Narendra Modi, has placed a major emphasis on empowering women and improving their position in all spheres of life. Since women’s empowerment is widely acknowledged to be a key factor in India’s rapid economic progress, this article aims to shed some light on how Modi’s policies and leadership are changing it.

Drive for & importance of women empowerment

Gender equality is emphasised expressly in the Preamble, Fundamental Rights, Fundamental Duties, and Directive Principles of the Indian Constitution. The Constitution not only ensures women’s equality but also grants the states the power to enact laws that positively discriminate against women. Women’s empowerment, involvement in the democratic process, receiving fair and equal chances, etc., all play significant roles in a parliamentary democracy.

The relevance of this was taken into consideration when legislation, developmental policies, and various programmes and schemes aimed at empowering women were created within the fundamental framework of the democratic government system.

Women’s empowerment in India is the most potent tool for growth since women are now actively working as leaders and outperforming others in various spheres of life. At the central, state, and local (panchayat) levels, there are programmes aimed at empowering women.

His government places a high priority on easing the lives of women and giving them opportunities for advancement. The government has provided opportunities for people to advance in their chosen fields, including the armed forces. Under PM Modi’s direction, a new age of women’s emancipation has started.

Today’s Indian society is largely made up of women, who are capable workers and leaders. In his analysis of the New India’s growth story, Prime Minister Narendra Modi noted that India is shifting away from “women-led development” and toward “women’s development”.

Today, the largest democracy in the world is led by Droupadi Murmu, the first president of tribal heritage in the nation.

The first female finance minister in the country is economist Nirmala Sitharaman.

Similarily, the Assembly of the State of Uttarakhand is now under the direction of Ritu Khanduri Bhushan.

It is asserted that women have exploited their enormous power and decisiveness to shape narratives in every profession. Experience has shown that women contribute more significantly than males to the formulation of policy. Women are now given responsibilities that they can handle as a result of Modi’s initiatives stressing their empowerment. Currently, women make up approximately 35.5 per cent of the Modi cabinet.

Furthermore, under Section 149(1) of the Companies Act, which governs the corporate sector, a particular kind of enterprise must have at least one female director on their board of directors.

The percentage of women in senior management in India was found to be 39% (ranked third), according to a 2021 poll by the consulting firm Grant Thornton, compared to the global average of 31%. This figure indicates a shift in how Indian businesses view working women.

The objectives of continuous initiatives have been the empowering of women at the bottom of the socioeconomic scale and significant representation across professions.

Three female fighter pilots were inducted into the Indian Air Force in 2018. Today’s female police and military personnel make a substantial contribution to the security of the country both at home and abroad. Now women are allowed to appear for the National Defence Academy (NDA) examination.

Similarly, in the aviation business, India has 12.4 percent more female pilots than the US and the rest of the world (an average of 5 percent).

Furthermore, in order to improve the competence, capability, and capacities of the Elected Women Representatives (EWRs) of Panchayats in village government and administration, the Ministry of Women & Child Development also developed a national training programme.

The following table contains the main schemes implemented in India for benefiting women and improving their empowerment:

The Pradhan Mantri Matru Vandana Yojana (PMMVY) and Pradhan Mantri Surakshit Matritva (PMSMA) have also been launched with the goal of promoting institutional births and routine health check-ups for expecting and lactating mothers. Additionally, all tribal beneficiaries may participate in the Poshan Sudha Yojana (PSY).

By implementing these programmes, the Modi administration has established a new paradigm for empowering women in the nation.

A further measure to promote women’s military service is the nationwide opening of all Sainik (Army) schools to females beginning with the academic year 2021–2022. The Modi administration modified the requirements for admission to Sainik (Army) Schools, which serve as feeder schools for the National Defence Academy, and allotted 10 per cent of the seats to female applicants.

• As part of the Union Budget 2022–23, Rs 1.71 lakh crores have been set aside for initiatives geared toward women. The gender component is now an essential component of intergovernmental fiscal transfers, according to Smiriti Irani, the minister for women and child development.
• While 68 per cent of loan accounts under the MUDRA scheme belong to women entrepreneurs, more than 81 per cent of account holders under the Stand Up India scheme are women. Furthermore, out of 41.93 crore accounts under the PMJDY plan, 23.21 crore are owned by women. These thriving professional women are India’s social activists for women’s emancipation. Not only are they self-sufficient monetarily, but they can also help other women by providing them with job opportunities.
• Beti Bachao, Beti Bachao (educate daughters, save daughters) was introduced to increase awareness and boost the effectiveness of social programmes for girls. As Prime Minister Narendra Modi placed a strong emphasis on programmes to stop female foeticide and empower women, it gained prominence during his first term.

The programme received Rs 100 crore as its initial investment. This strategy states that gender equality will have gained more public awareness and support by January 2021.

Additionally, this program’s coverage of 640 districts saw improvements in the gender ratio at birth in 422 of those districts (SRB). In addition, from 77.45 to 81.32, more girls were enrolled in secondary education. In addition, from 77.45 to 81.32, more girls were enrolled in secondary education. In addition, the Triple Talaq system protects women’s rights (divorce system).
• For the benefit of thousands of working women, 952 hostels have been authorised nationally since the Working Women Hostel programme was founded in 1972–1973.
• There were 254 projects across the nation as of July 2019, comprising 134 protection and rehabilitative residences. The Ujjawala Scheme provided benefits to 5,291 people.
• Eight women have so far received the Nari Shakti Puraskar for the first time. This is a national honour bestowed in recognition of the winner’s achievements in the community and the nation.
• Mahila Shakti Kendras (MSK) were supposed to be set up in 920 blocks and 115 districts across the nation from 2017 to 2020.
• According to the Empowered Committee (EC), a total of Rs 6212.85 crore has been allotted once the initiatives and projects funded by the Nirbhaya Fund have been reviewed by the end of 2021.
• Women from 13 states received Rajya Mahila Samman awards, while 116 women from 16 states received Zila Mahila Samman awards.
• A total of 321 female entrepreneurs will have enrolled on Mahila E-haat, an online marketing platform for female entrepreneurs, by February 2022.
• By 2021, there would be 704 One-Stop Centers (OSCs) operating around the nation, providing assistance to a few lakh women who have been victims of violence.
• There were 312 female cadets accepted into 33 Sainik Schools by March 2022.

Furthermore, Shaurya Srivastava and Nand Lal Mishra’s study from 2021 revealed that more than 87 percent of rural Indian women participate in household decision-making, compared to at least 91 per cent of women from urban areas. This is encouraging evidence of the growing influence of women in domestic decision-making.

Some nations now place a high premium on empowering women. Today, India’s best growth strategy is to empower women. By creating civic consciousness, implementing concrete policy frameworks, and educating people about women’s empowerment, the plight of women in society is being erased.

The Modi administration has prioritised women’s empowerment in India as a key force and an engine for rapid economic growth in order to create a $5 trillion economy.However, there can be a few gaps between the development of the strategy and the actual community participation that need to be bridged as quickly as possible.

Women’s underrepresentation in leadership, technical, and political roles may be the cause of the problem. For instance, despite the fact that women make up almost 40 per cent of the nation’s annual scientific PhDs, a poll by BiasWatchIndia found that only 13 per cent of scientists and science faculty in Indian higher education and research institutes are female. This is lower than the global average of 28 per cent.

The effectiveness of the aforementioned attempts to advance women’s status depends heavily on women’s capacity to interact with and inspire one another.

Female literacy programmes, capacity-building modules, and livelihood-oriented schemes were just a few of the strategies used in May 2022, according to Irani, to lower barriers for women to participate in Indian society, politics, and the economy.

Without a doubt, Modi is removing long-standing barriers to women’s empowerment in India. The government must, however, also make sure that the fundamental ideas of empowering women in the community, the marketplace, and the workplace are upheld to the highest standards. Furthermore, promoting women’s skill development in non-traditional jobs is also essential to making them self-sufficient.

Women can be organised into a diversity of professional groups to reinforce their negotiating position. In addition, non-governmental organisations (NGO) and other capable organisations should train and equip women with marketable skills so they may find alternative, respectable jobs where they can make a living wage.

In addition to government efforts to improve women’s empowerment in the country, developing a family approach is critical. If women are to be truly empowered, men must change their attitudes, since the family is the foundation of society.

Prof. Dr Prem Lal Joshi is the editor-in-chief of the International Journal of Auditing and Accounting Studies and a former NRI professor and senior fellow of the ICSSR WRC, Mumbai, India. Thanks are due to Dr Siriyama Kanthi Herath and Dr Preetha Chandran for their suggestions. The opinion expressed in this piece is the author’s own.

Dr Joshi can be reached at [email protected]