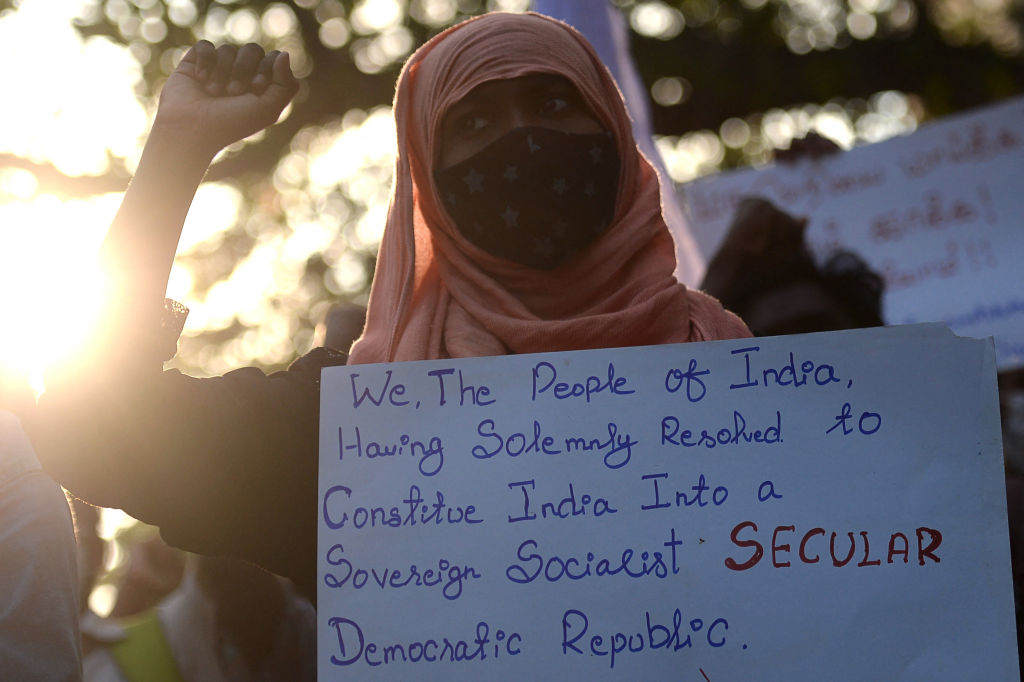 An activist from Students Federation of India protests against the recent hijab ban in some educational institutes in the southern Indian state of Karnataka in Chennai, Tamil Nadu, on February 10, 2022. (Photo by ARUN SANKAR/AFP via Getty Images)

A GOVERNMENT body in the US which monitors and reports on religious freedom abroad has reacted to the ongoing hijab (headscarves) controversy in the Indian state of Karnataka. The controversy erupted two months ago when a school in the state’s Udupi district refused to allow Muslim girl students wearing the hijab from entering the classroom.

Rashad Hussain, the ambassador-at-large for International Religious Freedom (IRF), said in a tweet that “hijab bans in schools violate religious freedom”. The issue has reached the judiciary and the state’s high court has advised against wearing the clothing till a verdict is issued on the matter. The state administration has also decided to close high schools and colleges till the court completes looking at petitions challenging the ban.

Religious freedom includes the ability to choose one's religious attire. The Indian state of Karnataka should not determine permissibility of religious clothing. Hijab bans in schools violate religious freedom and stigmatize and marginalize women and girls.

The Ministerial to Advance Religious Freedom of which Hussain is an envoy comes under the US Office of IRF, which has in the past reacted to religious tensions in India.

Hussain was appointed as the IRF ambassador-at-large for IRF by the US Senate last December. He is the first Muslim to hold the position. Previously, he had held several high-level positions in the US government including serving as the special envoy to the Organisation of Islamic Cooperation during the administration of Barack Obama.
The high court of Karnataka has said that it would resume hearing petitions challenging the hijab restrictions on Monday (14).

In an interim order, the court said that no religious dress, whether shawls or hijab, will be allowed inside educational institutions.

New Delhi is yet to respond to Mr Hussain’s comments on the hijab row in Karnataka.