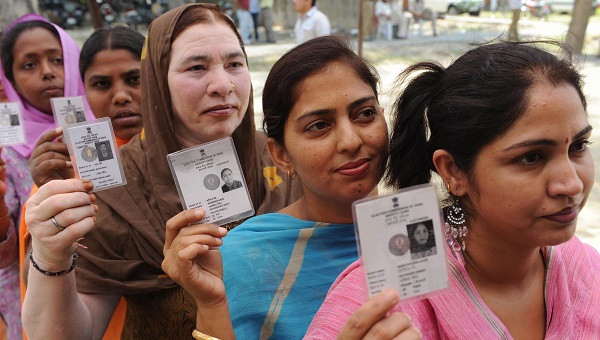 “Indian democracy presents an example before the world. While on one hand, an IED (improvised explosive device) is the weapon of terrorists, on the other hand, the voter ID (identity) is the weapon and power of democracy,” prime minister Modi said (Photo: NARINDER NANU/AFP/Getty Images).

He was speaking after casting his vote during the single-phase polling for Lok Sabha in his home state Gujarat.

After casting his vote, Modi walked some distance from the polling booth and interacted briefly with media persons.

“Indian democracy presents an example before the world. While on one hand, an IED (improvised explosive device) is the weapon of terrorists, on the other hand, the voter ID (identity) is the weapon and power of democracy,” he said.

“I am confident that the power of voter ID is much more than the IED and we should understand the importance of the voter ID card and come out to vote in large numbers,” he said.

Modi said he feels fortunate to participate in “the great festival of democracy” in his home state Gujarat.

“The third phase of polling is taking place today in the country. I am fortunate that I also got the proud moment to fulfil my duty by voting in my home state Gujarat and to have an active participation in this great festival of democracy,” he said.

“By voting, I feel the same sense of purity that one gets after taking bath at the Kumbh mela,” he told reporters.

Urging people to vote with full enthusiasm, he said, “The intelligence of Indian voters to understand whom to vote and whom not to vote is a matter of case study.”

He also welcomed the active participation of young voters, born in the 21st century, who are exercising their franchise for the first time in the ongoing Lok Sabha polls, and conveyed his best wishes to them.

“This entire century belongs to those who are voting for the first time. They have to vote for the bright future of this century. Therefore, I would especially urge the new voters to commit to hundred per cent voting,” he said.

“I am grateful to all the lovers of democracy who voted in large numbers in the first and second phases of the Lok Sabha elections,” he noted.

Modi reached the polling station at Nishan High School in Ranip area in an open jeep in the morning and cast his vote.

On way to the polling booth, he also greeted people who had gathered on both sides of the road to welcome him.

Modi’s mother also cast her vote at a booth in Raysan village of Gandhinagar district. The 95-year-old came to the polling booth at gram panchayat office of Raysan village and exercised her franchise.

After spending the night at the Raj Bhavan in Gandhinagar, Modi met his nonagenarian mother Hiraba near the state capital early Tuesday (23).

Polling in all the 26 Lok Sabha seats in Gujarat was held in a single phase on Tuesday (23).