WATCH: Railway bridge in India collapses like a house of cards in heavy rain 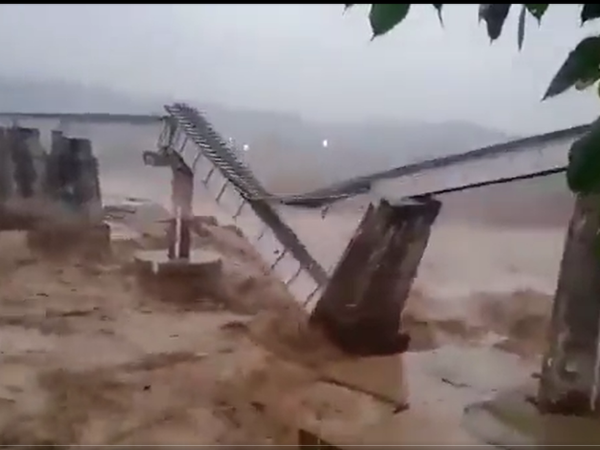 A railway bridge over the Chakki river in Himachal Pradesh in India collapses under heavy rain (Picture: Twitter)

Man has made much development but yet when it comes facing Mother Nature’s fury, he is quite helpless.

On Saturday (20), a railway bridge over the Chakki river in spate in Kangra district of the northern Indian state of Himachal Pradesh collapsed after one of its three pillars fell under heavy rainfall which has battered the Himalayan state.

A cloudburst took place in Dharamsala in Himachal Pradesh resulting in landslides in the area. A flash flood occurred in Mandi district of the state in the early hours on Saturday morning, causing water to inundate houses and shops and trapping residents and damaging vehicles parked on the road.

Schools were closed in Kangra, Kullu and Mandi districts of the state because of the conditions.

The administration has warned local people and tourists not to go near the rivers and streams.

The state’s disaster management department has made a forecast for landslides due to heavy rains till August 25.