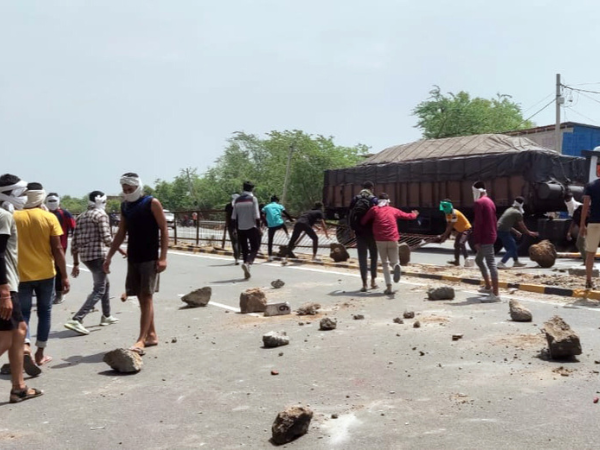 Protesters pelt stones during a demonstration against the Agnipath Recruitment Scheme for the Armed Forces, at Agra-Gwalior Highway on Friday. (ANI Photo)

AS India witnessed violent protests in various corners against the ‘Agnipath’ recruitment plan for the armed forces, Darbhanga in the eastern state of Bihar, where massive protests have been taking place since Wednesday (15), a shocking incident unfolded on Friday (17).

A schoolbus carrying children got stuck in a road blockade put up by the protesters against the ‘Agnipath’ scheme and kids on board the vehicle were crying out of fear as teachers and other staff members tried to calm them down.

A video of the incident went viral.

#WATCH | Bihar: A school bus, with children on board, got stuck in the road blockade by agitators in Darbhanga. The bus later managed to get out of the blockade with Police intervention.

Later, the local police helped the bus to reach its destination.

In Bihar, the protests have taken an ugly turn. The residence of Renu Devi, the state’s deputy chief minister who belongs to prime minister Narendra Modi’s Bharatiya Janata Party, was attacked while two offices of the BJP were set on fire.

On Friday, one person was killed in police firing in Secunderabad in the southern Indian state of Telangana.