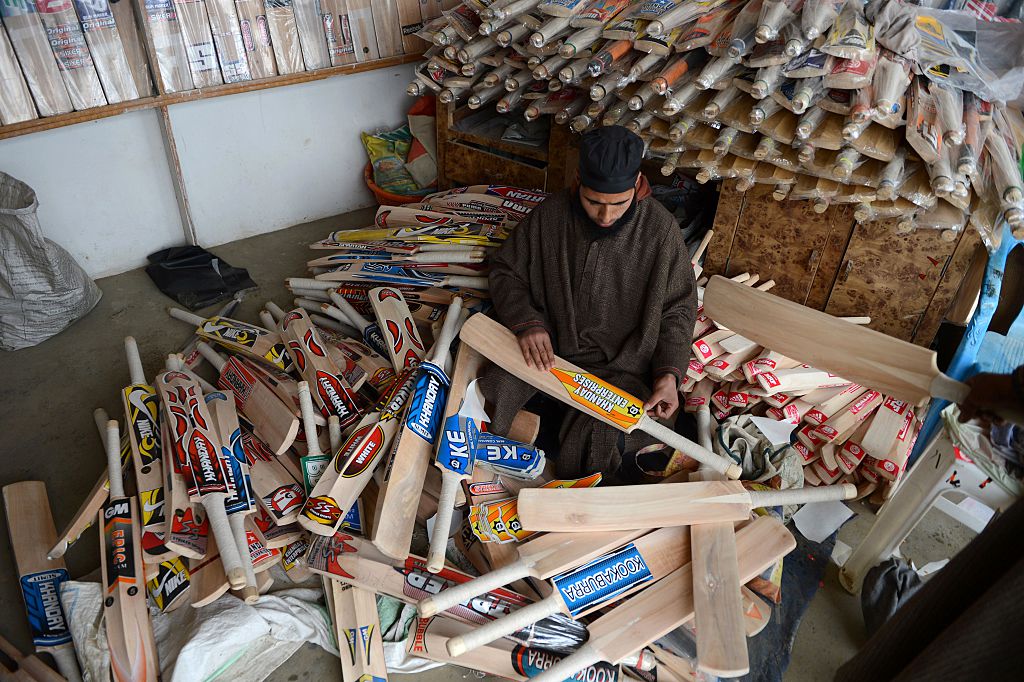 A Kashmiri shopkeeper puts labels on cricket bats in the village of Sangam,south of Srinagar. (Photo by TAUSEEF MUSTAFA/AFP via Getty Images)

The 102-year-old cricket bat industry in Kashmir has upped its standards over the years to compete with manufacturers that work with the fabled English willow.

But bat-makers fear a shortage of clefts might force closure of the Rs 300-crore (£30 million) enterprise that provides livelihood to over 100,000 people.

“We have been manufacturing cricket bats for the past 102 years. The quality of our bats is good and approved by the International Cricket Council (ICC). So quality-wise, we are not lacking. We are at par with (manufacturers that use) English willow, if not better,” said Fawzul Kabir, spokesperson for Cricket Bats Manufacturing Association of Kashmir.

“This was evident from the fact that the longest six in the recent ICC Men’s T20 World Cup in Australia was hit using a Kashmir willow bat,” Kabir told the Press Trust of India.

The UAE’s Junaid Siddique hit the 2022 ICC Men’s T20 World Cup’s longest six against Sri Lanka using a bat manufactured by Anantnag-based GR8 Sports. However, the 400-odd bat manufacturing units are staring at an uncertain future as they fear a shortage of willow clefts might force their factories to close within five years.

“Willow produce is dwindling fast and we fear that it might become extinct within the next five years. We have been requesting the government to go for a willow plantation drive to ensure a sustainable supply,” Kabir said.

He also highlight the afforestation drives undertaken in Canada and Pakistan to drive home his point. He said more than a lakh people, not only from Jammu and Kashmir but from Jalandhar in Punjab and Meerut in Uttar Pradesh, rely on the industry for their livelihoods.

“In a scenario where an industry is on the verge of collapse, the government needs to work on a war footing,” he said. Kabir said while the Sher-e-Kashmir University of Agricultural Sciences and Technology provided them 1,500 willow saplings last year for replacement, each unit needs a supply of around 15,000 clefts a year.

“As cricket is growing fast, the demand for bats will also increase. We had a dozen countries playing cricket two decades ago. Today, that number has gone up to around 160.

Kabir suggested that the government should consider allowing sapling plantations in the wetlands and on the riverbanks where willow trees used to be grown earlier.

“If willow trees are planted in these places again, the bat industry can survive,” he said. GR8 Sports Production Manager Mohammad Niyaz said the government had taken steps for plantation of willow saplings but it was not at the scale required to support the industry.

“More and more cricket leagues are coming up around the world and the demand for bats is only going to increase. While the industry can provide employment to artisans, finished bats can keep youngsters involved in sports and away from evils such as drug abuse,” he added.

An Industries and Commerce department official said while there was no dearth of willow in Kashmir, the main issue facing the units was a lack of modern seasoning technology and smuggling of clefts to factories outside Kashmir.

“In Kashmir, seasoning of clefts is still done in the traditional way and it can take anywhere between six months to a year. It blocks precious capital of the unit holder and puts strain on his financial situation. This has, in some cases, led to the closure of a unit,” the official, who is not authorised to speak to the media, said on the condition of anonymity. The official said a proposal to set up a seasoning plant was approved a few years ago but was shelved due to the outbreak of Covid-19.

“A new proposal to set up an electric or solar plant that will reduce the seasoning time to just 15 days is under consideration of senior officials,” he added.

Steps had to be taken to curb cleft smuggling from the Valley to factories in other parts of country, mainly in Punjab and Uttar Pradesh, the official said. He said land measuring 20 hectares had been earmarked to growing willow trees that have been developed by scientists at Sher-e-Kashmir University of Agricultural Sciences and Technology.