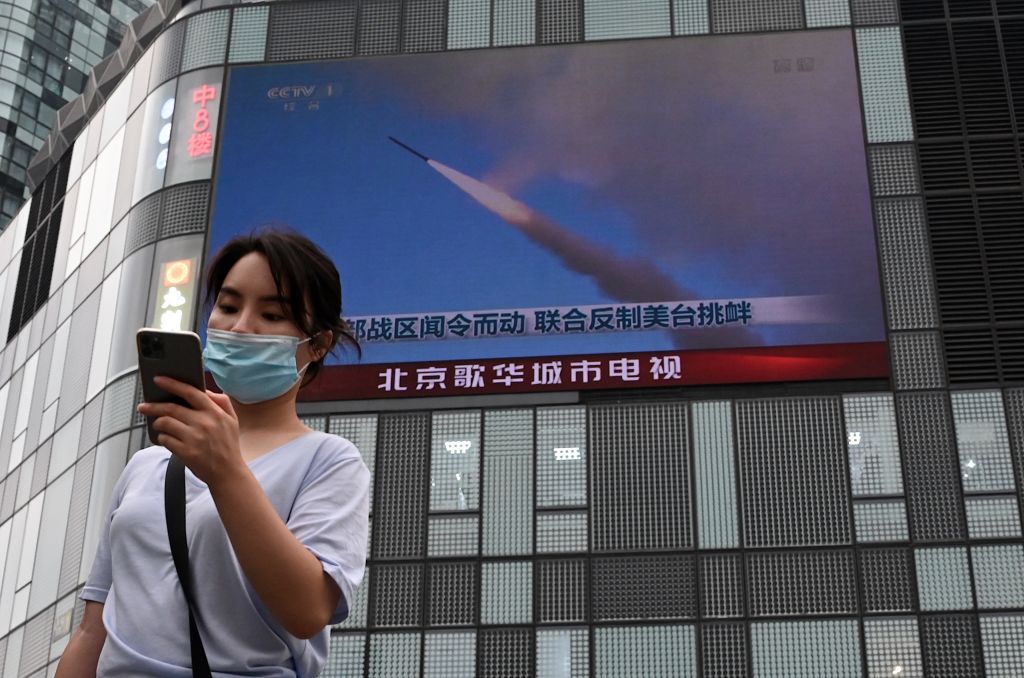 A woman uses her mobile phone as she walks in front of a large screen showing a news broadcast about China’s military exercises encircling Taiwan, in Beijing on August 4, 2022. (Photo by Noel Celis / AFP) (Photo by NOEL CELIS/AFP via Getty Images)

The growing tension over US politician Nancy Pelosi’s visit to Taiwan might hit India not geopolitically but in the automobile sector.

The aftereffects of Pelosi’s high-profile visit to Asia and China’s protest against it could trigger yet another semiconductor crisis which has already pegged the automobile industry back in times of the pandemic.

According to a report in India’s Outlook magazine, just when growth was being fuelled in the auto sector and shortage of the chip seemed to nearing an end, the visit by the speaker of the US House of Representatives to Taiwan, which is a global leader in the semiconductor industry, seems to have given rise to a fresh fear.

If any action is initiated against Taiwan after Pelosi’s visit, the consequences would be disastrous for global supply chains. Since Taiwan is a leader in manufacturing semiconductors, a key component used in almost everything today — from cars to bank ATMs, a crisis would undoubtedly have a devastating effect for the world economy. Even China, which has been after Taiwan ever since Pelosi’s visit, would struggle to meet its massive semiconductor needs.

It may be mentioned here that Pelosi also met Mark Liu, chairman of TSMC, during her visit to Taiwan.

Coming back to the auto industry, it was on shaky ground because of the chip shortage last year.

In 2020, the car manufacturers still managed as demand for new vehicles was low because of the pandemic. But when that high demand returned, the makers struggled to acquire the chips and it took a toll on manufacturing. India’s biggest automaker Maruti could manage to sell just over 1,00,000 units in November last year.

Nine months since then, the situation has eased much with car manufacturers touching figures that were seen in the pre-pandemic days in terms of sales. But with the row over Taiwan escalating, the threat of yet another semiconductor crisis is looming, the Federation of Automobile Dealers Associations of India said on Thursday (4).

Vinkesh Gulati, the association’s president, told Indo-Asian News Service that after the Russia-Ukraine war, the world is now facing another danger in the form of the Taiwan-China war.

“Due to this, the threat of semiconductor shortage is once again looming as chip-maker TSMC raises a red flag that if war hits, Taiwanese chip manufacturers would be rendered ‘non-operable’,” Gulati said.