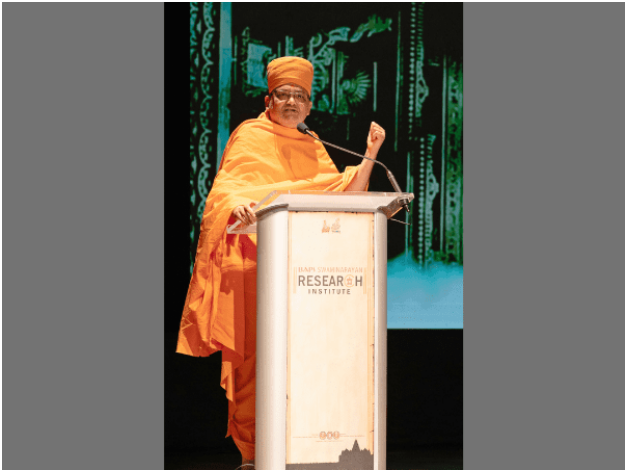 THE BAPS Swaminarayan Research Institute, US, was inaugurated on Saturday (18) in Robbinsville, New Jersey, at the site of Swaminarayan Akshardham – North America. Besides Mahamahopadhyaya Pujya Bhadreshdas Swami, a renowned scholar of Hindu Philosophy and Sanskrit, more than 115 representatives from 50 Hindu temples and organisations, devotees and swamis and scholars from India and the US were present on the occasion.

Plans for the research institute in Robbinsville gained momentum after members of the local community showed growing interest in learning Sanskrit and gaining a deeper understanding of Hindu scriptures. The institute will strive to foster social harmony, interfaith dialogue, public engagement, and academic discourse through a rigorous teaching of Sanskrit, Vedic and classical literature and Hindu values, beliefs and practice. It is also expected to generate opportunities for value-based education, innovative research and creative expression.

On Saturday morning, hundreds of swamis and devotees gathered at the site to take part in a ‘Satsang  Dikshā  Homātmak Pāth.’ They made offerings to a sacred fire at a unique yajna while recitation of selected verses from the Satsang Dikshawere took place.

The yajna was performed to pray for world peace and an auspicious beginning for the research institute.

Besides those who were present physically to witness the event, thousands saw it via a live telecast across North America and around the world.

His Holiness Mahant Swami Maharaj joined the ceremony virtually from Ahmedabad, India, and inaugurated the institute with the lighting of the inaugural lamp (deep pragatya) symbolising the spreading of the light of knowledge throughout the world.

Mahant Swami Maharaj blessed the attendees and those who remotely joined the event’s live broadcasting.

Addressing the assembly, he said, “Yogiji Maharaj had envisioned such an institute and was passionate about youths learning and discoursing in Sanskrit. The research institute has fulfilled this vision. May students excel in their studies and work together to serve society, expanding the circle of unity across the world. In the spirit of “Vasudhaiva Kutumbakam”, meaning the world is one family, let’s reach out to extend the circle of global harmony.”

Elaborating on Mahant Swami Maharaj’s vision, he encouraged children and youth to explore their interests in the areas of arts and Hindu philosophy.

The ‘BAPS Swaminarayan Research Institute’ is the first such centre of learning and research of Indian languages and Hindu scriptures in the Swaminarayan tradition to open in the US.