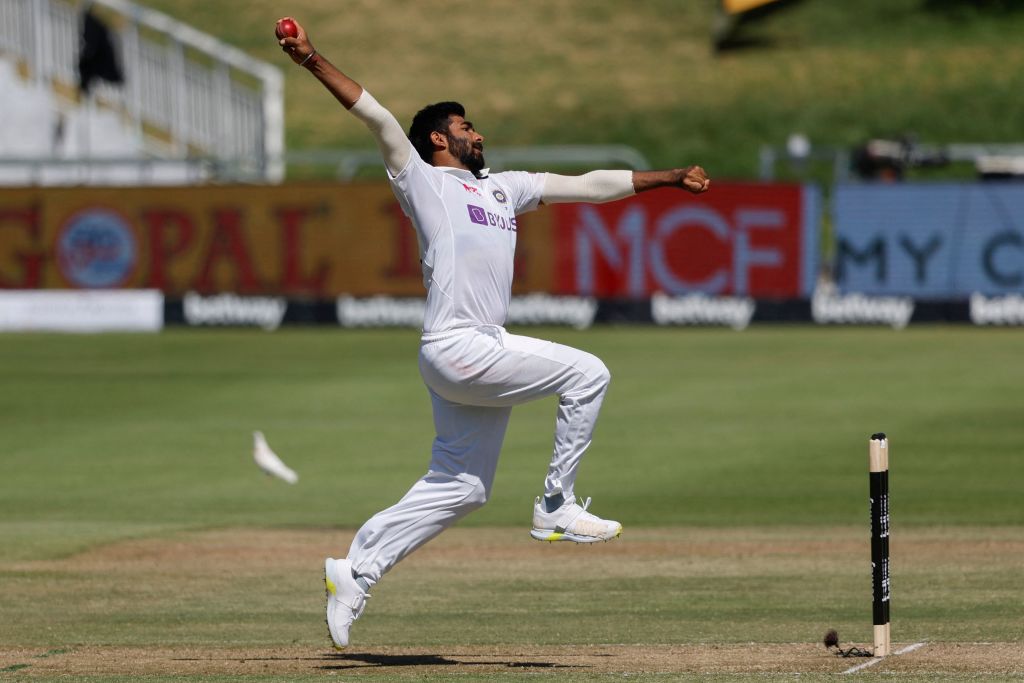 India seamer Jasprit Bumrah in action on Day 2 of the third Test match against South Africa at Newlands stadium in Cape Town on January 12, 2022. (Photo by MARCO LONGARI/AFP via Getty Images)

JASPRIT Bumrah made a memorable return to Cape Town, the venue where he had made his Test debut four years earlier, on Wednesday (12) when he picked a five-wicket haul to bring India back into the third and deciding Test against South Africa.

The visitors bowled out the Proteas for 210 on the second day of the match, thanks to their fast bowlers who were led by Bumrah who took five wickets for 42 runs, his seventh five-for in the long format. India lost both their openers early in the second essay but Cheteshwar Pujara (9 not out) and captain Virat Kohli (14 not out) put up a gritty show with the bat to ensure that the Indians did not lose the third wicket.

ALSO READ: India bowled out for 223 even as Kohli stands tall

India ended the day at 57 for 2, extending their overall lead over South Africa to 70 runs with three more days of play. The visitors were bowled out for 223 on Day 1.

South Africa started the day from their overnight score of 17 for 1 with opener Aiden Markram (8) and night-watchman Keshav Maharaj (25) resuming. They lost their second wicket in the form of Markram before adding to their overnight score. When Maharaj departed, South Africa were placed at 45 for 3 but a solid 67-run partnership between Keegan Peterson (72) and Rassie van der Dussen (21) gave the hosts a hope of putting up a good total.

After Dussen fell, Temba Bavuma (28) added 47 runs with Peterson but Mohammed Shami struck twice in two balls to leave the Proteas reeling at 159 for 6. Kagiso Rabada (15) and Duanne Olivier (10 not out) tried to put up some resistance along with Petersen but the Indian seamers did not allow the home team to overtake their total.

India will be looking to Pujara and Kohli to bat as long as possible on Day 3 and reproduce a long partnership as they did in the first innings while the South Africans will expect Rabada, who took four wickets in the first innings, to peg the opponents back.

India have never won a Test match in Cape Town and a series in South Africa.