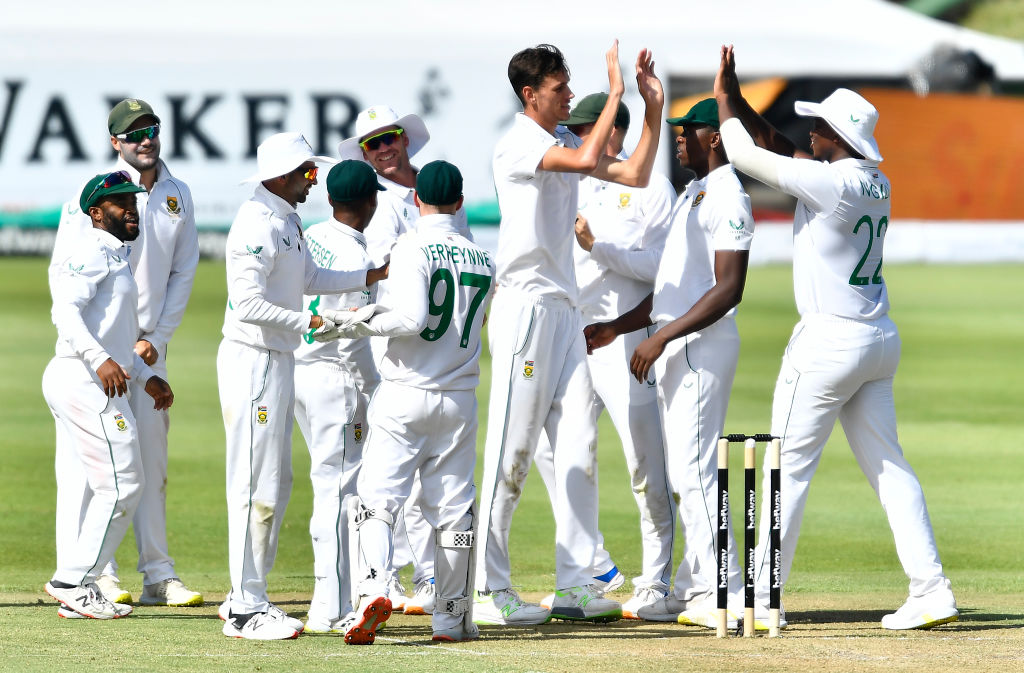 South Africa cricketers celebrate the fall of an Indian wicket on Day 1 of the third Test match at Newlands in Cape Town, South Africa, on January 11, 2022. (Photo by Ashley Vlotman/Gallo Images/Getty Images)

A FOUR-WICKET burst from Kagiso Rabada in his 50th Test pegged India back on Day 1 of the third Test match against South Africa at Newlands Cricket Ground in Cape Town on Tuesday (11) as the visitors were all out for 223 runs.

In reply, the home team batted for eight overs and lost their captain Dean Elgar, the hero of the second Test in Johannesburg, who was picked by Jasprit Bumrah for three runs. Aiden Markram was unbeaten on eight while night-watchman Keshav Maharaj was batting on six as South Africa ended the day at 17 for 1, trailing the opponents by 206 runs.

The Indian batters had a challenging day facing the South African pace attack after Virat Kohli, who returned to the playing XI after missing the second match due to back spasm, won the toss under slightly overcast conditions and opted to bat first.

The captain stood tall even as wickets tumbled around him and scored a fighting 79 off 201 balls. In scoring the runs, Kohli overtook team coach Rahul Dravid to become India’s second-highest scorer in Tests in South Africa, trailing only Sachin Tendulkar. However, the ace batter would be unhappy to have missed what would have been his first international hundred in more than two years.

India lost their two openers KL Rahul (12) and Mayank Agarwal (15) quickly after they put up 31 runs for the first wicket. Kohli then added 62 runs with Cheteshwar Pujara (43) and India went to lunch at 75 for 2. But post break, the Indian middle order crumbled as Pujara and Ajinkya Rahane (9) fell. Marco Jansen, who has made his international debut in this series, broke the Pujara-Kohli partnership by picking the former.

Kohli added 51 runs with wicket-keeper-batter Rishabh Pant (27) for the fifth wicket and the visitors went to tea at 141 for 4. In the third session, India’s lower order fell earlier than expected and eventually, they were dismissed for 223 with Kohli perishing as the penultimate wicket.

India made two changes to their playing XI for the third Test. Kohli came in for Hanuma Vihari while pacer Umesh Yadav replaced an injured Mohammed Siraj.

The three-Test series is tied 1-1 at the moment after South Africa drew level in Johannesburg by winning by seven wickets. India won the first Test in Centurion by 113 runs.