Causing A Rukus On The Airwaves 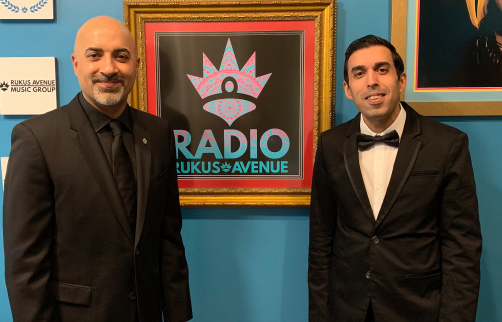 The newly-launched online Rukus Avenue Radio began broadcasting globally earlier this month and it already looks like a game-changer.

The commercial-free radio station focused on South Asian content has gathered an impressive roster of hosts selected from around the world including a fair few from the UK.

It is available on the mammoth Dash Radio platform free of charge and has over 80 original shows in tune with modern-day audiences, ranging from discussions to a count down of the latest hits.

I caught up with the two massively experienced music professionals to find out more about their path-breaking radio station.

Tell us about Rukus Avenue Radio?
Sammy: We’re so honoured to announce the world’s first global mainstream South Asian radio station. In an exclusive partnership with the largest all-digital radio platform Dash Radio, we have put together an amazing collection of talk shows and music shows by over 85 prominent South Asians from around the world.

What was the biggest challenge of putting it together?
Sammy: It was to put together the mechanism and operation to craft, produce and handle this wide array of programming. We knew that playing music wasn’t going to be the only way to build a genuine dialogue with our audience. I think our audience wants more, so our focus was to best facilitate the magic that our hosts were coming up with and make sure we could handle the volume of shows from day one.

Tell us about the variety of shows?
Sammy: Our variety is our genuine strength. Of our 85 shows, no two are alike. Almost half of them are talk shows and the breadth of dialogue is an honest reflection of what I believe is happening in our community. South Asians, no matter where we are in the world, are diverse and many have been waiting for this type of identifiable platform that can help move our community further.

You have a strong contingent of British hosts; how did you decide on the various presenters?
Raoul: When Sammy and I first thought of this idea, we really enjoyed making a short list of personalities we looked up to – worked with over the years or wanted to work with. We weren’t even sure if they’d want to come on board, but once we started signing them it became a domino effect, where they also started recommending other talents. The next thing you know, we had dozens of diverse and super talented hosts. The response has been so phenomenal that we already have a waiting list of celebrities we’re very excited to bring on board in the future.

Tell us, what has the response been like since you launched?
Sammy: The word I keep hearing is ‘finally’. For many of us around the world, we’ve never been a part of a larger South Asian dialogue that unites us, and this station allows us to have something we can call home. I think the progressive nature of the station is what many are referring to when they say ‘finally’. So the response has been very positive despite the challenges of a station in its embryonic phase.

Do you think platforms like this are the future of radio?
Raoul: There’s no doubt that digital radio platforms are the future, the same as what Netflix has done for the TV industry. I, unfortunately, don’t know many people under age 30 who still listen to FM radio, and everything is heard digitally through their phones. It’s really incredible to see how DJ Skee and his amazing team at DASH Radio have revolutionised the radio industry, and are about to in even more ways we’re excited to be a part of. We always emphasise, we’re a radio station with over 85 original shows and not just a streaming channel of music, whi-ch frankly there are way too many of these days.

Who are you hoping tunes in?
Sammy: We’re seeing traffic from around the world already. I think all South Asians, no matter where they are in the world, are our target demographic. If you have a mobile phone or a computer nearby, you can listen to us for free. We have no commercials and we don’t ask you for a subscription payment. Our station is completely free and accessible to everyone globally.
Raoul: I think our programming makes us universal. The strength of our hosts and their engagement is for everyone. All are welcome.

What is the master plan going forward?
Sammy: The plan is to build the channels of awareness for this station. We feel our product is a very competitive experience and our hope is to foster this into becoming the pre-eminent source for South Asian culture around the world. We are looking at expanding into India early next year, with an emphasis on enhancing our host profile within the South Asian subcontinent.

Why should we tune into Rukus Avenue Radio?
Raoul: We’re very honoured to be presenting the world’s first mainstream South Asian radio station, launched in partnership with the biggest all-original digital broadcaster in the industry, Dash Radio, and having the cream of the crop of personalities from the USA, Canada, UK and India on this journey with us. We genuinely feel we’ve created something that will speak and unite our generation across the globe, as well as give non-South Asians a chance to see how far we’ve come as a community.