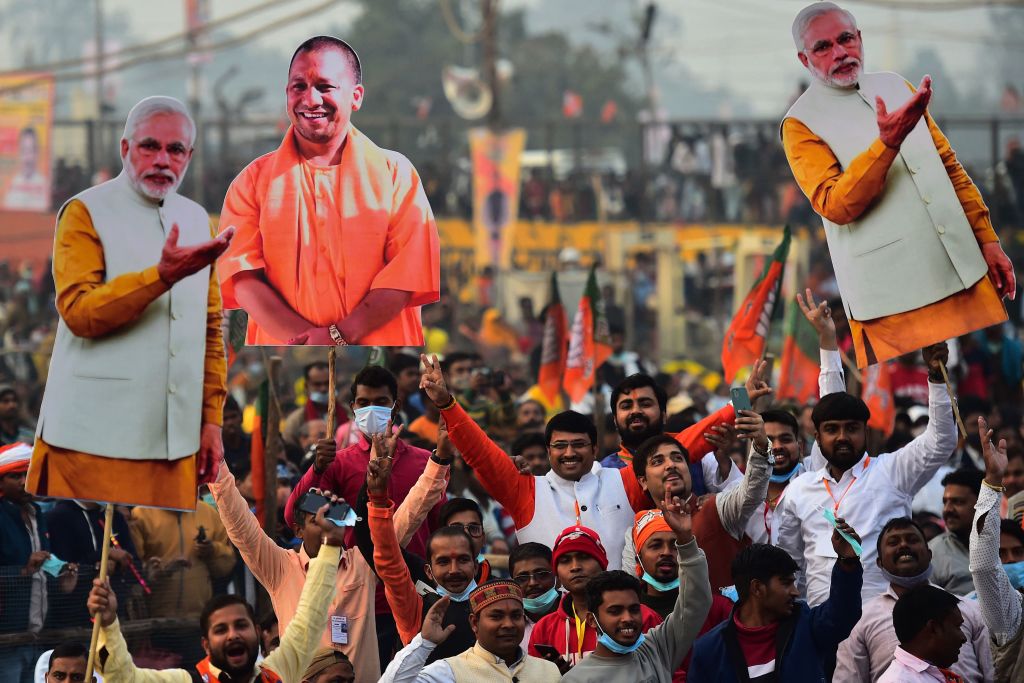 Supporters of the ruling Bharatiya Janata Party attend a rally in Allahabad in the northern Indian state of Uttar Pradesh in December 2021. (Photo by SANJAY KANOJIA/AFP via Getty Images)

ELECTIONS in India’s most populous state Uttar Pradesh are a few months away along with some others but even as the contesting parties accelerate their campaign ahead of the high-voltage elections, the surging cases of coronavirus have posed a challenge to all of them.

On Wednesday (5), the Indian National Congress, which is aiming to do well in the Uttar Pradesh elections ahead of the 2024 general polls, postponed all its political rallies and programmes in the poll-bound states, including Uttar Pradesh, citing the worsening Covid-19 situation in the country and that public rallies could end up as super-spreaders.

ALSO READ: For Modi and his BJP, 2022 will be a big election year

KC Venugopal, the party’s general secretary said they had asked the state units to assess the on-ground situation and decide whether or not to proceed with the events that have been planned.

“Congress has decided to postpone major rallies in UP and other poll-bound states. We have asked state units to assess the COVID-19 situation in their states and then take a decision on holding rallies,” Venugopal was quoted by news agency Asian News International.

The Congress’s move came in after the shocking incident in the state’s Bareilly district where hundreds of women and teen girls without masks assembled at a party event which almost witnessed a stampede.

Uttar Pradesh’s ruling Bharatiya Janata Party also cancelled a government function in the state’s Gautam Buddh Nagar district scheduled on Thursday (6) and which was to be attended by chief minister Yogi Adityanath.

Even though no official reason was cited for the decision, the fact that the district reported the highest number of Covid cases from the state in the last week made the reason evident.

The Uttar Pradesh election is a high-voltage political event but given the surge in cases, there have been calls to defer the polls. Last month, a court in the state urged the election commission and prime minister Narendra Modi to postpone the elections due to the growing number of cases.