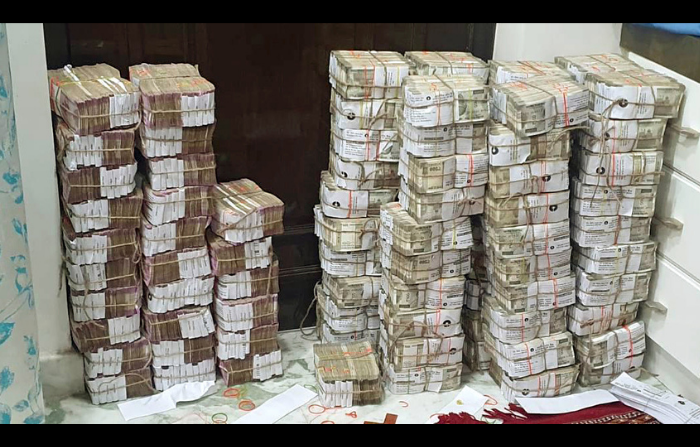 The hoards of cash that were recovered from a businessman’s residence during a raid conduct by tax officials in the northern Indian state of Uttar Pradesh. (ANI Photo)

TAX officials in India have seized over millions in cash and gold by conducting raids on suspected tax evaders this week, including a record haul of 1.94 billion rupees (£19.2 million) and 23 kilograms of gold ahead of the upcoming elections in five key states in 2022.

The raids saw a flurry of accusations from rival political parties over shielding tax evaders as they prepare to contest the elections that will set the tone for the general elections of 2024. One of the states that goes to the polls this season is Uttar Pradesh, India’s most populous and most significant political state which is ruled by prime minister Narendra Modi’s Bharatiya Janata Party (BJP).

The seizures of the cash and gold also brought the focus on India’s burning political issue of ‘black money’.

The country’s finance ministry said in a statement following the raids, “This is the biggest ever seizure of cash.”

The officials found the money and gold in sacks in an underground storage facility on the premises of a businessman in the city of Kanpur in Uttar Pradesh.

According to media reports, Samajwadi Party, a major political outfit in the poll-bound state, and the BJP traded allegations and counter-allegations by linking the businessman to the other party.

Besides the cash and gold, 600 kilograms of sandalwood were also seized, the officials said.

Elections in India, the world’s largest democracy, are often accompanied by cash that flows from businesses and political parties to win influence and favour, according to observers. The parties in the run for power dole out cash to voters and their workers and machinery.

In 2016, Modi tried to crack down on the shadow economy by banning high-denomination banknotes but data from India’s central bank showed that almost all of the banned money had crawled back into the banking system.

P Chidambaram, a senior leader of the opposition Indian National Congress and a former finance minister of India, said the latest seizure of cash proved that Modi’s effort to shut down the underground cash economy was unsuccessful.

“The case exposed the utter failure of demonetisation,” he said on Twitter.

Elections are due by March in states of Uttar Pradesh, Uttarakhand, Punjab, Goa and Manipur.

The two states of Himachal Pradesh and Gujarat will go to polls later in the year.