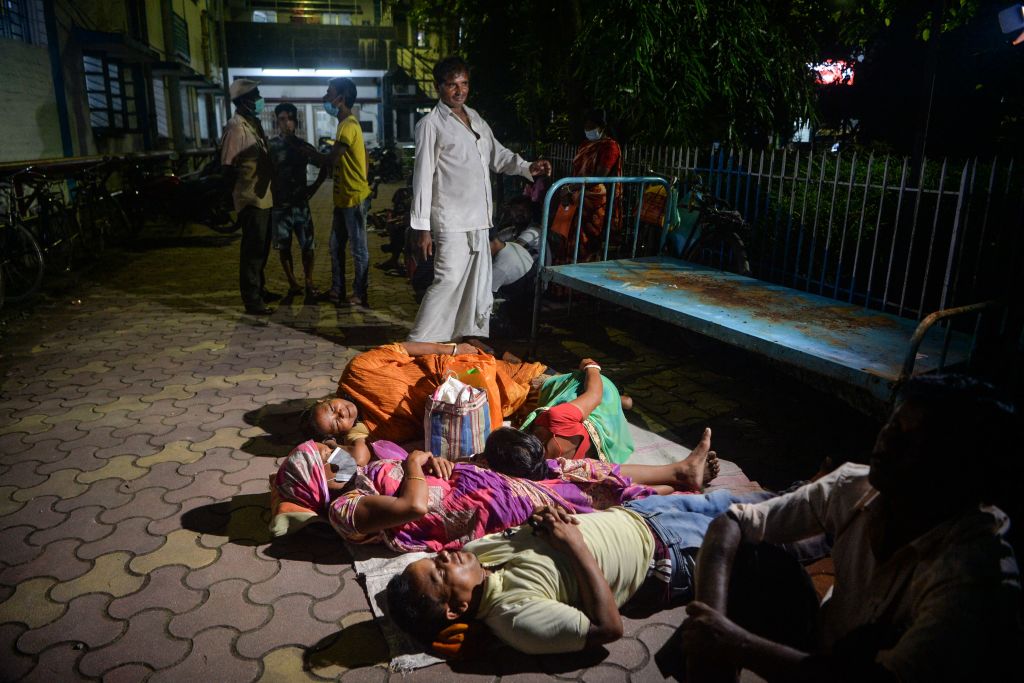 People sleep outside a government-run rural hospital in Siliguri in the eastern Indian state of West Bengal. (Photo by DIPTENDU DUTTA/AFP via Getty Images)

WHEN the devastating second wave of the coronavirus pandemic wreaked havoc in India earlier this year, the country’s health infrastructure received a serious jolt. Hospitals were overburdened with patients that left doctors, nursing staff members and equipment under serious pressure.

It was no exception for Jawaharlal Nehru Medical College and Hospital (JLNMCH) in the Bhagalpur district of the eastern state of Bihar. Its wards and intensive care units were so much filled with patients and their anxious relatives that the doctors going on rounds had to take help of armed escorts to shield them from probable violence.

Reuters cited doctors as saying that when the second wave hit the country, the government hospital with around 800 beds was faced with the task of serving millions and the challenge was not easy.

But the situation turned things in favour of the hospital eventually.

Once it survived the challenge posed by the pandemic, the JLNMCH got a new lease of life as authorities decided to turn things around in Bihar where healthcare infrastructure has only gone downhill.

The Reuters report said that the hospital in Bhagalpur now has upgraded infrastructure. It has set up its own oxygen generators that will meet almost its entire demand, hired dozens of new nurses, increased its ICU capacity by almost double and linked hundreds of its beds to piped oxygen for the first time in several years. Even its exterior might get a fresh coat of paint, the news outlet said, quoting the superintendent.

Work is also underway for a new 200-bed advance-care hospital which started a few years ago and it is likely to be ready by the first half of 2022.

“COVID has been a boon for us,” Asim Kumar Das, medical superintendent of JLNMCH, told Reuters in an interview. “Although it destroyed mankind and brought huge suffering, it has given us so many changes in the infrastructure of the hospital,” he added.

Das said the hospital was in talks with the Bihar government for 200 more beds in the main complex besides additional human resources as there was an “acute shortage” of doctors and paramedical staff.

It is not just the story of Bihar but of many parts of India where health infrastructure is getting a boost after the effect of the pandemic, government figures have shown.

The Narendra Modi government, along with states and government-run companies, have extended funds to hospitals after the second wave’s devastation so that all of India’s 740-plus districts have at least one oxygen-generation plant.

The Indian government has also pledged to set up many new hospitals and upgrade the existing ones in the next few years with an investment of around $9 billion (£6.6 billion).

A number of states are also planning to double their spending behind health, the central government, which plans to increase its public-health spending to 2.5 per cent of the gross domestic product by 2024-24 from 1.2 per cent this fiscal, Reuters added.