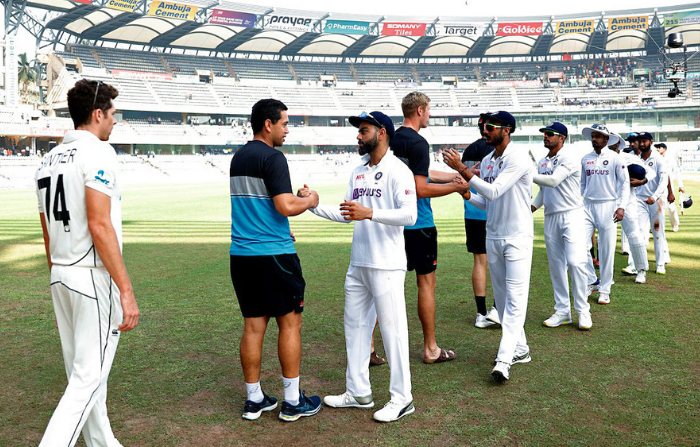 Indian and New Zealand players exchange pleasantries at the end of the second Test at the Wankhede Stadium in Mumbai, India, in which the hosts thumped the Kiwis by 372 runs to pocket the two-match series 1-0. (ANI Photo)

INDIA won their two-Test series against New Zealand 1-0 on Monday (6) when they thumped the Kiwis by 372 runs in the second match at Wankhede Stadium in Mumbai with almost two days remaining.

New Zealand, who resumed their chase for a mammoth target of 540 on Day 4 at 140 for 5, lost their last five wickets for only 27 runs to get bowled out for 167. They were skittled out for a paltry 62 in their first innings that gave the home team a lead of 263 runs.

This was India’s biggest win in a Test match in terms of runs and their first victory in the current World Test Championship. The first Test in Kanpur was drawn. India whitewashed New Zealand 3-0 in a T20 international series before the Tests.

New Zealand’s high point in this match will be the feat of their spinner Ajaz Patel who picked all 10 wickets in the first innings and finished with 17 wickets in the series.

The lower order of the Kiwis, which put up a determined resistance on Day 5 of the first Test and denied India a win, failed to replicate the same in Mumbai. The hero of the first Test – Rachin Rathindra – and Henry Nicholls, who resumed as the overnight batters, added 22 runs in the day before the former fell to spinner Jayant Yadav. He then picked three more wickets with the visitors adding just five runs to end up with a four-wicket haul.

Nicholls fell as the final wicket which was picked by Ashwin, who also ended up with a four-for and a match haul of eight wickets.

The win under Kohli also made him the first player to be part of the winning side in 50 matches in each format of the game.