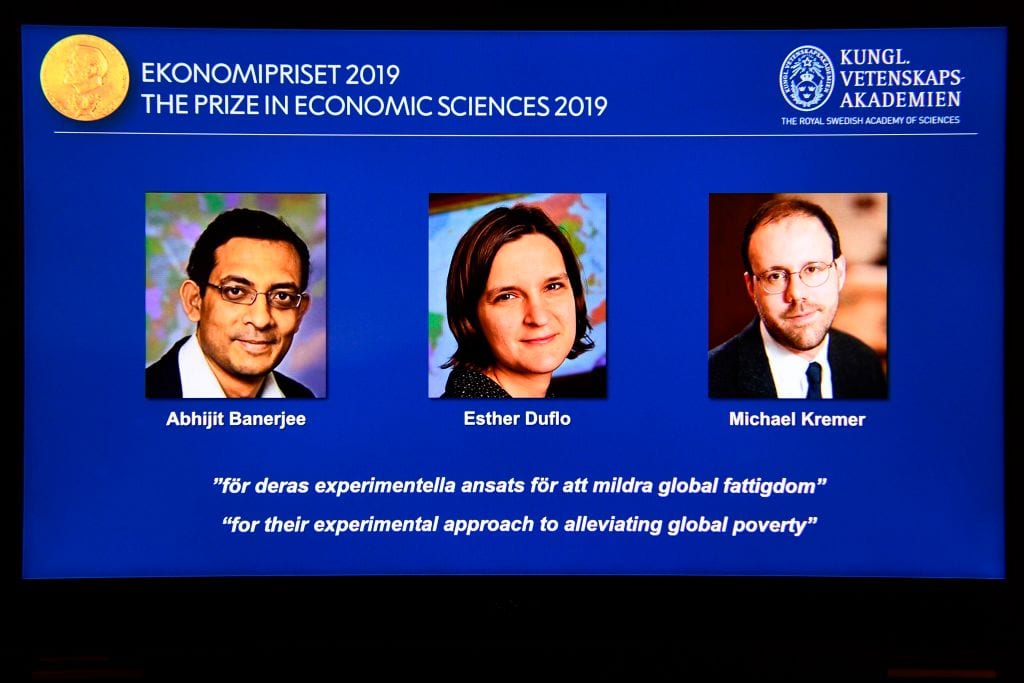 A computer screen displays the co-winners of the 2019 Sveriges Riksbank Prize in Economic Sciences in Memory of Alfred Nobel (L-R) Abhijit Banerjee, Esther Duflo and Michael Kremer during a press conference at the Royal Swedish Academy of Sciences in Stockholm, Sweden, on October 14, 2019 (Photo: JONATHAN NACKSTRAND/AFP via Getty Images).

A TRIO of American economists on Monday (14) won the Nobel Economics Prize for their work in the fight against poverty, including with new approaches in education and healthcare, the Royal Swedish Academy of Sciences said.

Indian-born Abhijit Banerjee of the US, his French-American wife Esther Duflo, and Michael Kremer of the US were honoured “for their experimental approach to alleviating global poverty,” the jury said.

“This year’s laureates have introduced a new approach to obtaining reliable answers about the best ways to fight global poverty,” the jury said.

The three found efficient ways of combatting poverty by breaking down difficult issues into smaller, more manageable questions, which can then be answered through field experiments, the jury said.

“They have shown that these smaller, more precise, questions are often best answered via carefully designed experiments among the people who are most affected,” it said.

“As a direct result of one of their studies, more than five million Indian children have benefitted from effective programmes of remedial tutoring in schools. Another example is the heavy subsidies for preventive healthcare that have been introduced in many countries,” the jury said.

Duflo is only the second woman to win the Nobel Economics Prize in its 50-year existence, following Elinor Ostrom in 2009.

Duflo, 46, told the Nobel committee by video link the honour was “incredibly humbling”.

“I didn’t think it was possible to win the Nobel Prize in Economics before being significantly older than any of the three of us,” she added.

Banerjee, born in 1961, and Duflo are both professors at the Massachusetts Institute of Technology (MIT) in the US, while Kremer, 54, is a professor at Harvard University.

Unlike the other Nobels awarded since 1901, the Economics Prize was not created by the prizes’ founder, philanthropist and dynamite inventor Alfred Nobel, in his 1895 will.

Each of the Nobels comes with a prize sum of nine million Swedish kronor ($914,000), to be shared if there is more than one winner in the discipline.

But unluckily for recent winners, the prize’s value has lost around $185,000 in the past two years, due to the depreciation of the Swedish krona.

The trio will receive the prize from King Carl XVI Gustaf at a formal ceremony in Stockholm on December 10, the anniversary of the 1896 death of Alfred Nobel.

Last year, the prize went to William Nordhaus and Paul Romer of the US for constructing “green growth” models that show how innovation and climate policies can be integrated with economic growth.

The Economics Prize wraps up a Nobel season that stands out for its crowning of two literature laureates, Polish writer Olga Tokarczuk for 2018 delayed by a year due to a sexual harassment scandal and Austrian novelist Peter Handke for 2019, whose selection sparked controversy because of his pro-Serb support during the Balkan wars.

Prior to that, the laureates in the fields of medicine, physics and chemistry were announced.

On Friday (11), Ethiopian prime minister Abiy Ahmed won the Peace Prize for his efforts to resolve the long-running conflict with neighbouring foe Eritrea.