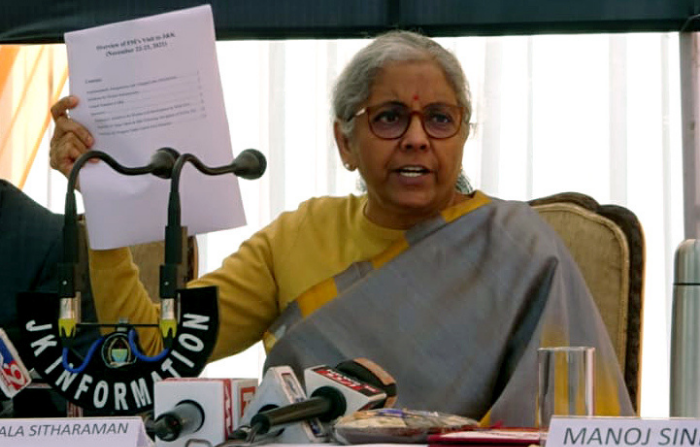 Amid concerns over the decline in the value of the rupee against the US dollar, Indian finance minister Nirmala Sitharaman on Tuesday (2) asserted there is no collapse of the unit and it is actually finding its natural course. Sitharaman informed the Rajya Sabha or the Upper House of the Indian parliament that the Reserve Bank of India (RBI) is continuously monitoring the local currency and intervening only if there is volatility.

“The RBI interventions are not so much to fix the value of the Indian rupee because it is free to find its own course,” the minister told the Rajya Sabha during Question Hour. Replying to supplementaries, she said interventions that are happening from the RBI side are more for containing volatility that is happening between the Indian rupee and the US dollar and so on.

“Even the interventions being made by RBI are not so much to determine the value – increase or decrease, of the Indian rupee. It is not for that. It is more to avoid the volatility and allow it to find its course. “India, like many other countries, is not pitching its currency at a level extraneously. So the ways and which we want to strengthen… the RBI and the Ministry are fairly engaged in it,” she said as members expressed concerns over the decline in the value of the Indian currency.

On suggestions that non-resident Indians should be allowed to make remittances in foreign currency, she said it is not an assurance that the Ministry of Finance will give but she can only pass on the suggestion to the RBI. Sitharaman said the rupee has seen more fluctuations against the US dollar but its performance is better than its peers. “We have withstood the impact of the US Fed’s decisions much better than any other peer currencies,” she told the house.

Actually, if you compare the Indian rupee versus other currencies, it is appreciating in its value, she said, urging the members to understand the context and speak about the Indian rupee. “I would like to assure the member that there is no collapse of the Indian Rupee,” she asserted.

On the reserves coming down, she said, “We are still somewhere in the range of (USD) 500 (billion). As of July 22, it was at USD 571.56 billion reserves, she said, adding that it was not a small amount and India is still comfortably placed.

“So, I want the house to take into cognizance the Indian rupee’s performance versus others, whether it is the UK Pound and so on and contextualise the performance of Indian rupee versus the US, particularly because of the steps that are being taken by the US Fed,” she told the Rajya Sabha. As of July 22, it was at USD 571.56 billion (£468 billion) reserves, she said, adding that it was not a small amount and India is still comfortably placed.

“There is no collapse. It is actually finding its natural course. The RBI is continuously monitoring it and intervening only if there is volatility. RBI interventions are not so much to fix the value of the Indian rupee because it is free to find its own course,” Sitharaman said. Earlier, TMC member Luizinho Faleiro claimed in the last six months, the rupee depreciated 28 times by 34 per cent and foreign reserves declined to $572 billion by mid-July.

Recalling the remarks of Narendra Modi when he was chief minister of Gujarat, Pramod Tiwari of the Congress asked when the value of the rupee will increase. The finance minister replied that when the then Gujarat CM and now prime minister had made comments on the Indian currency, the economy was in serious shape on all other parameters.

“The reason for his comments then was that India had double-digit inflation for 22 months in a row. India had become a fragile economy. Today there is a recovery from the pandemic, the second wave, the Ukraine war India’s currency is still strong, please keep it in mind in Amrit Kaal,” she said. Earlier, minister of state for finance Pankaj Chaudhary said the government is making efforts on the declining value of the Indian rupee.

During the UPA from 2004-2014, he said the value of the rupee in a year was down 10-12 per cent, whereas during the NDA government in the last eight years since 2014, the decline in the rupee is much less. He said that the US Dollar value has increased by 4.54 per cent.