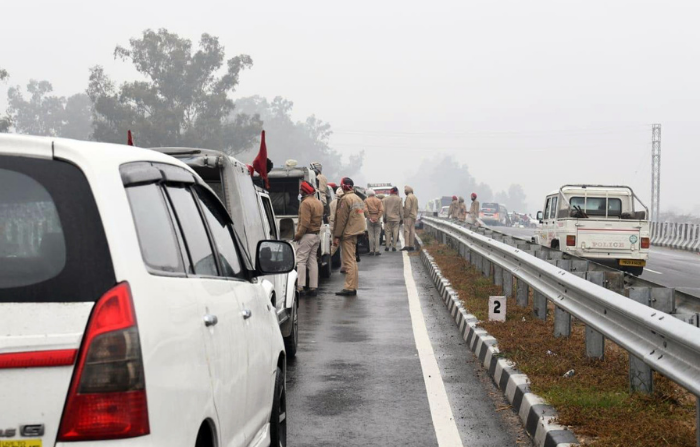 Indian prime minister Narendra Modi’s convoy stuck on a flyover near Hussainiwala in Ferozepur district of the northern Indian state of Punjab on January 5, 2022. (ANI Photo)

A MAJOR controversy broke out in India’s political circles on Wednesday (5) after prime minister Narendra Modi’s convoy faced a ‘security lapse’ in the poll-bound northern state of Punjab.

Modi, however, thanked the state’s chief minister, who is from the opponent party, for remaining “alive”.

Modi’s Bharatiya Janata Party (BJP) and the Indian National Congress, which is in power in Punjab, locked horns in the wake of the incident with the former slamming the Congress government over the reported security lapse and the latter denying that any such lapse took place.

The prime minister had to return to the state’s Bathinda airport due to the alleged breach during his visit to the poll-bound state and told state government officials, “Apne CM ko thanks kehna, ki mein Bhatinda airport tak zinda laut paaya (give my thanks to your chief minister as I managed to reach Bathinda airport alive).”

The home ministry took cognisance of the “serious security lapse” and sought a detailed report from the government of Punjab. The state authorities were also asked to fix responsibilities for the lapse and take action.

In a statement, the ministry said Modi landed at Bathinda airport in the morning from where he was to reach the National Martyrs Memorial at Hussainiwala in Ferozepur district of Punjab bordering Pakistan by helicopter. But the prime minister had to wait for 20 minutes due to rain and poor visibility.

When the weather did not improve, it was decided that Modi would visit the memorial by car (last month, he undertook an 80-kilometre journey by car in BJP-ruled Uttar Pradesh because of inclement weather) which would take him more than two hours. He proceeded to travel by road after confirmation of necessary security arrangements was received from the state police.

However, when the prime minister’s convoy was about 30 kilometres from the destination, it was found that a flyover was blocked by some protesters and the convoy got stuck on a flyover and it remained there for 15-20 minutes.

“This was a major lapse in the security of the Prime Minister. The Prime Minister’s schedule and travel plan was communicated well in advance to the Punjab Government. As per procedure, they have to make necessary arrangements for logistics, security as well as keep a contingency plan ready,” the home minister’s statement said.

“Also in view of the contingency plan the Punjab Government has to deploy additional security to secure any movement by road , which were clearly not deployed. After this security lapse, it was decided to head back to Bathinda Airport,” it added.

The BJP slammed the Congress government of Punjab with its national president JP Nadda even accusing chief minister Charanjit Singh Channi of refusing to receive a phone call related to the matter.

“To make matters worse, CM Channi refused to get on the phone to either address the matter or solve it. The tactics used by the Congress government in Punjab would pain any one who believes in democratic principles,” Nadda said in a tweet in Hindi.

He also said the prime minister’s visit to launch development projects worth millions in the state was disrupted.

Channi, who took over a few months ago, told a news channel that there was no security lapse.

“There was no security lapse. PM’s road plans were made at the last minute. He was supposed to go by helicopter. I was up late at night overseeing security arrangements for his rally. 70,000 chairs were put up for rally but only 700 people turned up,” he was quoted as saying by The Indian Express.

Captain Amarinder Singh, a former Congress leader who has made alliance with the BJP for the upcoming polls after floating his new party — Punjab Lok Congress — slammed the state government saying the incident was a “complete failure of law and government”.

Taking to Twitter, the former chief minister of Punjab said, “Complete failure of law and order in Punjab, CM and HM Punjab, in particular. When you cannot provide smooth passage to the Prime Minister of the country and that too just 10km from the Pakistan border, you have no right to stay in office and should quit!”

Complete failure of law and order in Punjab, CM and HM Punjab, in particular. When you cannot provide smooth passage to the Prime Minister of the country and that too just 10km from the Pakistan border, you have no right to stay in office and should quit!