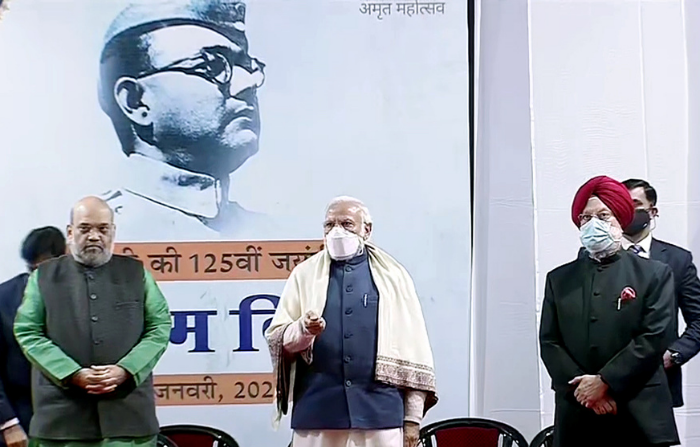 Indian prime minister Narendra Modi unveils the hologram statue of Netaji Subhas Chandra Bose on his 125th birth anniversary in presence of Indian home minister Amit Shah (to his right) and housing and urban affairs minister Hardeep Singh Puri (to his left), at the India Gate, in New Delhi on January 23, 2022. (ANI Photo)

The government has decided to install a grand granite statue of Bose and till the work is completed, the hologram statue will remain at the same place.

The statue is an acknowledgement of the leader’s contribution to the country’s freedom movement.

The hologram statue will be powered by a 30,000 lumens 4K projector. An invisible, high gain 90 per cent transparent holographic screen has been set up in such a way that it is not visible to the visitors.

The three-dimensional image of Netaji will be projected on it to create the effect of a hologram. The size of the hologram statue is 28 feet in height and 6 feet in width.

The Modi government also decided to celebrate Netaji’s birthday as ‘Parakram Divas’ every year. The Republic Day (January 26)  celebrations also began from Sunday instead of Monday (24).