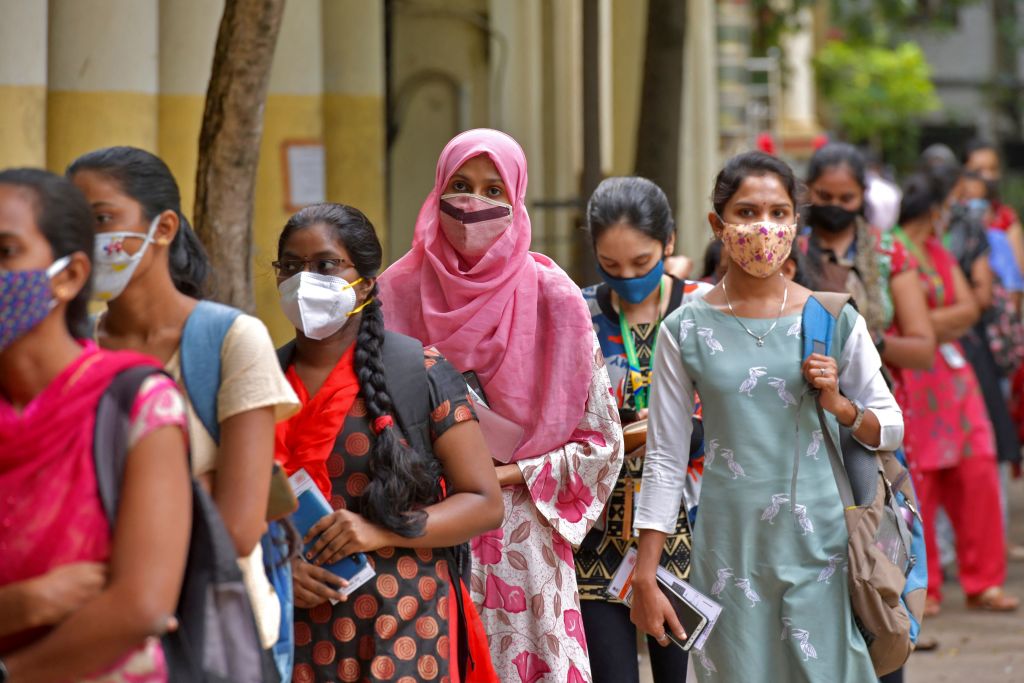 College students stand in a queue for a dose of the Covid-19 coronavirus vaccine in Bangalore in the southern Indian state of Karnataka. (Photo by MANJUNATH KIRAN/AFP via Getty Images)

THE UK government is likely to block again the progress on sharing information on manufacture of vaccines as fresh figures have revealed how the country’s Commonwealth allies, including India, are struggling to meet their goal of vaccinating their populations. The UK government’s move is expected to come ahead of an important international World Trade Organisation (WTO) meeting in Geneva, Switzerland.

The figures gathered by member of parliament Gareth Thomas from the House of Commons Library showed that the end of September, almost 72 per cent of the population of the UK had been administered at least one dose of the vaccine while 66 per cent were fully vaccinated. But the scenario was less inspiring for other Commonwealth nations.

According to a press release, India, whose Serum Institute makes some of the UK’s 100 million dose order of the AstraZeneca jab, could fully vaccinate only 19 per cent of its population at the end of September while less than 48 per cent got their first dose.

In South Africa, where clinical trials had played a key role in the development of the Oxford/AstraZeneca vaccine, the progress was even worse. Less than 16 per cent of the country’s population were fully vaccinated by the end of September while just over 22 per cent got one dose.

Both India and South Africa are leading the efforts at the WTO which meets in Geneva on Wednesday (13) to convince some of the world’s biggest pharmaceutical firms to release the intellectual property behind the critical Covid vaccine to speed up the manufacture and rollout of vaccination programmess in the poorest of the nations.

The waiver has found support from more than 100 countries and even the United States recently joined the calls for the waiver of the vaccine patents. But opposition from countries like the EU, Japan and the European Union has prevented the waiver from being implemented.

The UK has committed funding to the global COVAX scheme, vowing to send its excess vaccines to under-vaccinated countries. Experts, however, said that this does not do enough to address the fundamental problem and that is the global shortage in vaccines being produced.

“Thousands are dying because not enough vaccines are being produced. The government must think again and do more to support our commonwealth partners, the reality is that if the world does not act to ensure that every country has access to sufficient vaccines no country will be fully safe from fresh waves of the virus,” Thomas said.

“The Trips waiver is not the whole answer to increasing global supply of vaccine, but it is an important part of ensuring we can fully and confidently emerge from this dreadful pandemic.”

Shadow secretary of state for international trade Emily Thornberry published along with other shadow ministers a 10-point plan ahead of the G7 summit earlier this year to transform global vaccine production.

The plan, which urges the government to engage constructively with American proposals for a waiver of vaccine patents, aims to resolve global shortage in vaccine production, control the spread of Covid-19 and put in place the infrastructure and mechanisms to tackle pandemics in the future.