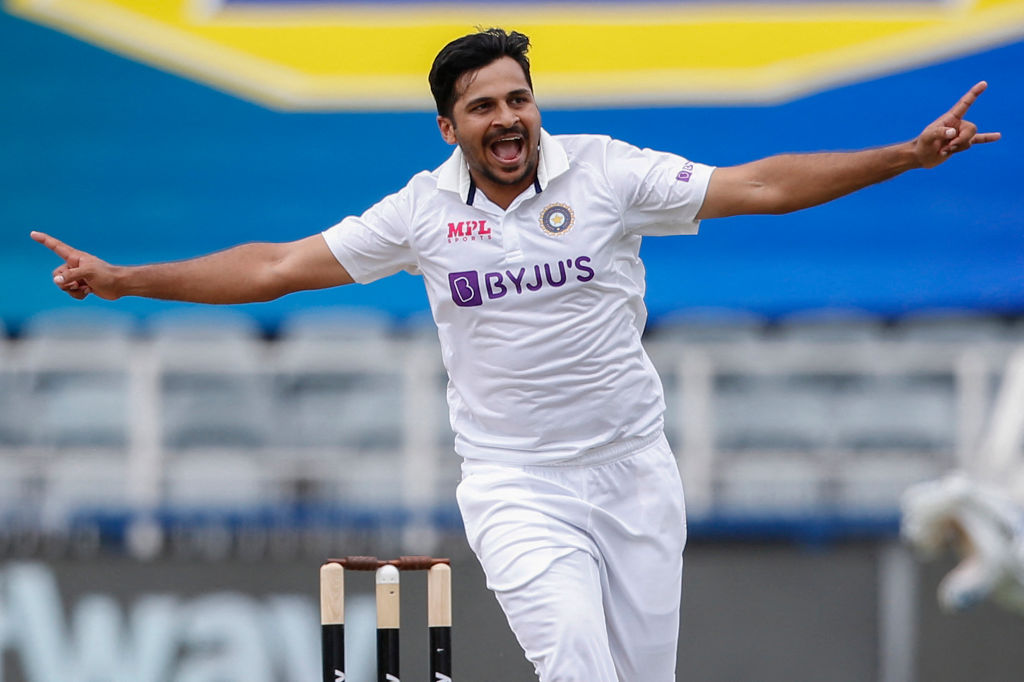 India’s Shardul Thakur celebrates one of the seven wickets that he picked on the second day of the second Test cricket match against South Africa at the Wanderers Stadium in Johannesburg on January 4, 2022. (Photo by PHILL MAGAKOE/AFP via Getty Images)

INDIA seamer Shardul Thakur on Tuesday (4) excelled with the ball against South Africa in the second Test match at the Wanderers Stadium in Johannesburg and took seven wickets for 61 runs to prevent the hosts from taking a big lead.

India were 85 for 2 at stumps on Day 2 in their second essay with Cheteshwar Pujara batting on 35 and Ajinkya Rahane on 11. They lost the openers — stand-in captain KL Rahul (8) and Mayank Agarwal (23). They were 58 runs ahead overall with three days to go.

Thakur, who is playing in just his sixth Test, went wicketless on the first day but delivered on the second day as India had a challenging task to defend a moderate total of 202. Thakur picked three wickets in 12 balls after the Proteas reached 88 for 1 and came back to break a strong-looking partnership between Temba Bavuma (51) and Kyle Verreynne (21). He also polished off the South Africa tail to help India bowl them out for 229, taking a lead of 27 runs.

The 30-year-old right-arm medium pacer, who took his first-ever five-for in a Test innings on the day, eclipsed the record of former South Africa bowler Allan Donald who till now had the record of producing the best bowling figures in a South Africa-India Test match innings. Donald had taken seven wickets for 84 runs against India in Port Elizabeth in 1992.

Shardul also bettered the record of former India spinner Harbhajan Singh who took seven wickets for 120 runs against South Africa in Cape Town in 2011 to become the most successful Indian bowler in a Test innings in South Africa.

India were bowled out on the opening day of the Test match after Rahul won the toss and elected to bat.