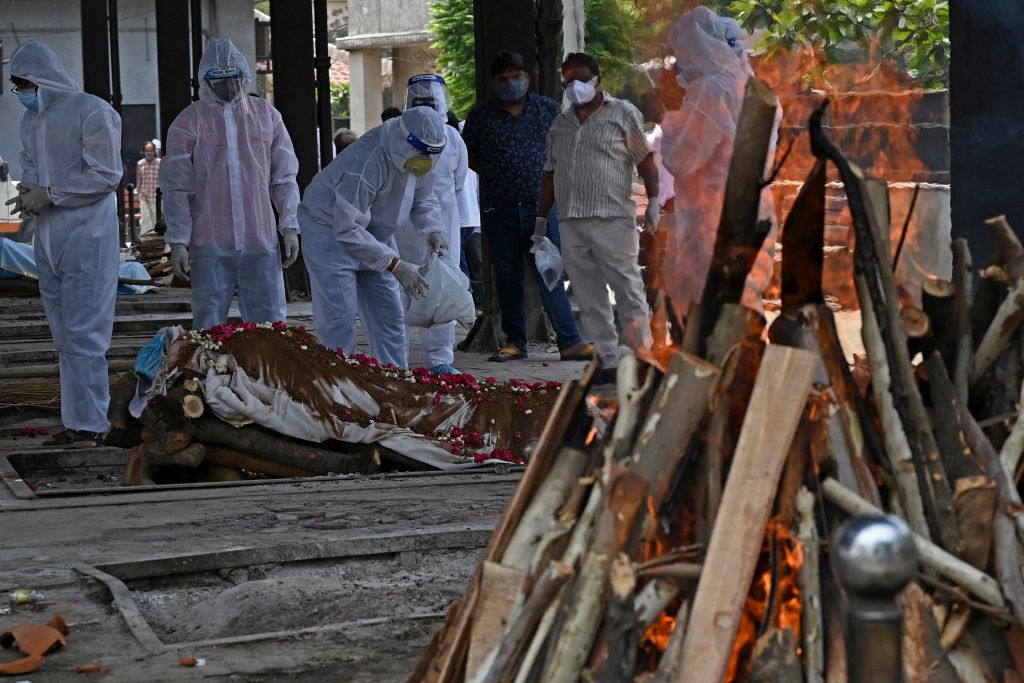 Relatives and family members wearing PPE suits (Personal Protection Equipment) perform the last rites of people who died from Covid-19 at a crematorium in New Delhi, India, in May 2021. (Photo by ARUN SANKAR/AFP via Getty Images)

INDIA’S coronavirus death tally officially is told to be less than 500,000 but if a new study carried out by a leading global epidemiologist is to be believed, the country has seen approximately three million deaths from the deadly virus by September last year, making it the worst-hit nation in the world.

Prabhat Jha, the director of the Centre for Global Health Research at the University of Toronto, Canada, conducted a telephonic survey covering 140,000 people across India to know whether anyone in their household had died from Covid-19, The Telegraph, UK, reported.

His team also analysed government reports from hospitals for deaths and compared them with official data. They concluded that India had actually had 2,300 and 2,500 deaths per million citizens till September which means nearly three million fatalities.

Officially, the worst-hit nation in the world in terms of death is the United States with a tally of more than 837,000. Brazil is officially the second worst-hit nation with a death toll of 620,251.

It has been long apprehended that India’s death toll is much more than what is projected officially due to a failure to register deaths accurately, particularly during the devastating second wave last year when the country’s health system was overwhelmed.

India’s public health system is one of the most underfunded one in the world and data on death record has not been flawless. In 2017, for instance, only four in five deaths were logged while one in five registered deaths also had a cause identified, according to data from the Indian government, The Telegraph report added.

During the devastating second wave, thousands of Indians died outside hospitals or at homes. Many could not even get tested for Covid-19 before death while several were buried in makeshift burial sites.

The discrepancy in the death count has been noted in the mortality data in many states. In the central state of Madhya Pradesh, for example, there were almost 24 times the expected deaths between April 2020 and May 2021.

In December, the western state of Gujarat, which is also the home state of prime minister Narendra Modi, acknowledged that there were more deaths caused by Covid than what is seen officially, as a court document has shown, thereby lending credence that the country’s actual death toll is much higher than what is reported.