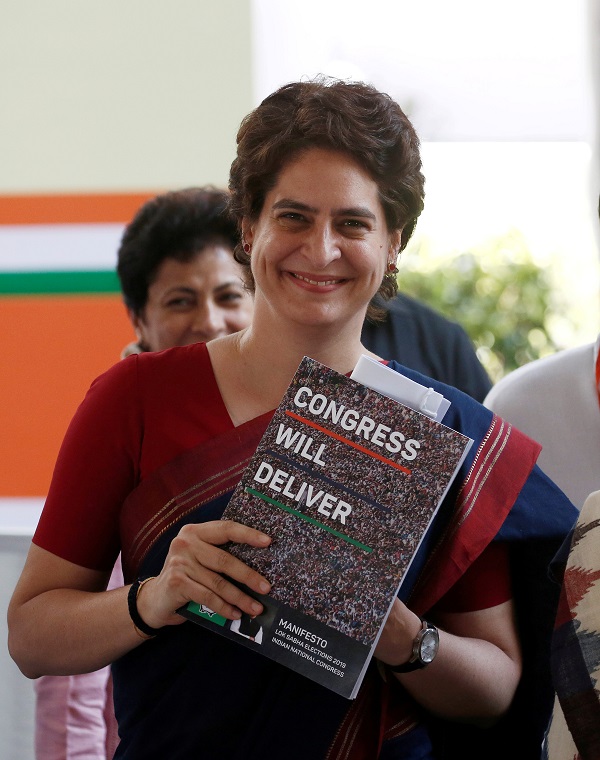 INDIA’S main opposition Congress party has told its workers not to lose heart and to remain vigilant at vote-count centres after exit polls predicted a clear election victory for prime minister Narendra Modi.

The counting of votes cast in the seven-phase general election will take place on Thursday (23), with the result expected later that day.

Modi’s ruling coalition is projected to win between 339 and 365 seats in the 545-member lower house of parliament with a Congress-led opposition alliance getting only 77 to 108, an exit poll from India Today Axis showed on Sunday (19).

The ruling alliance, led by Modi’s Bharatiya Janata Party (BJP), seems assured of victory and will meet in New Delhi later on Tuesday (21) to discuss a new government.

But exit polls in India have proved misleading before and Congress general secretary Priyanka Gandhi Vadra, the younger sister of party president Rahul Gandhi, urged party workers to ignore them, and to keep the faith.

“Don’t let rumours and exit polls discourage you. This is being spread to break your determination,” she said in an audio message late on Monday (20).

“This has further raised the need for you to remain alert. Please keep vigil outside strongrooms and counting centres. We are confident that our combined efforts will bear fruit,” she said, referring to centres where electronic voting machines are kept.

The two Gandhis are members of the latest generation of the Nehru-Gandhi dynasty to aspire to govern India.

The staggered general election billed as the world’s biggest democratic exercise with some 900 million eligible voters, began on April 11 and finished on Sunday (19).

The BJP says it is confident the final results will reflect the exit polls. On Tuesday (21) afternoon, workers decorated the party’s headquarters in Delhi with lights and flags and put up big tents in anticipation of the celebrations to come.

The BJP has also urged Congress to think about whether the Nehru-Gandhi dynasty still enjoys the support of the people.

The family has dominated politics since the British colonial rulers left in 1947, with three prime ministers.

But finance minister Arun Jaitley, a senior BJP member who would likely retain his role in a new Modi cabinet, said Congress could no longer rely on the family to win votes.

“Leaders are judged on merit and not on caste or family names,” Jaitley said in a Facebook post.

“The prime minister’s style of rising above caste and concentrating on performance related issues received far more acceptability with the electorate.”

Some Congress officials say it is wrong to blame the Gandhi family every time the party fares badly and point to three wins in state assembly elections last year under the leadership of Rahul Gandhi.

If the BJP wins another majority on its own as expected, it would be the first time a party has won back-to-back majorities in parliament since 1984.

Modi was able to rally his base and make national security a central election theme after a surge in tension with Pakistan in February following a suicide bomb attack in Kashmir by Pakistan-based militants.

Modi ordered air strikes on a suspected militant camp in Pakistan and many Indians applauded his tough stand.

Political analysts say the focus on security blunted Congress attacks on the government for failing to address low farm prices and unemployment.