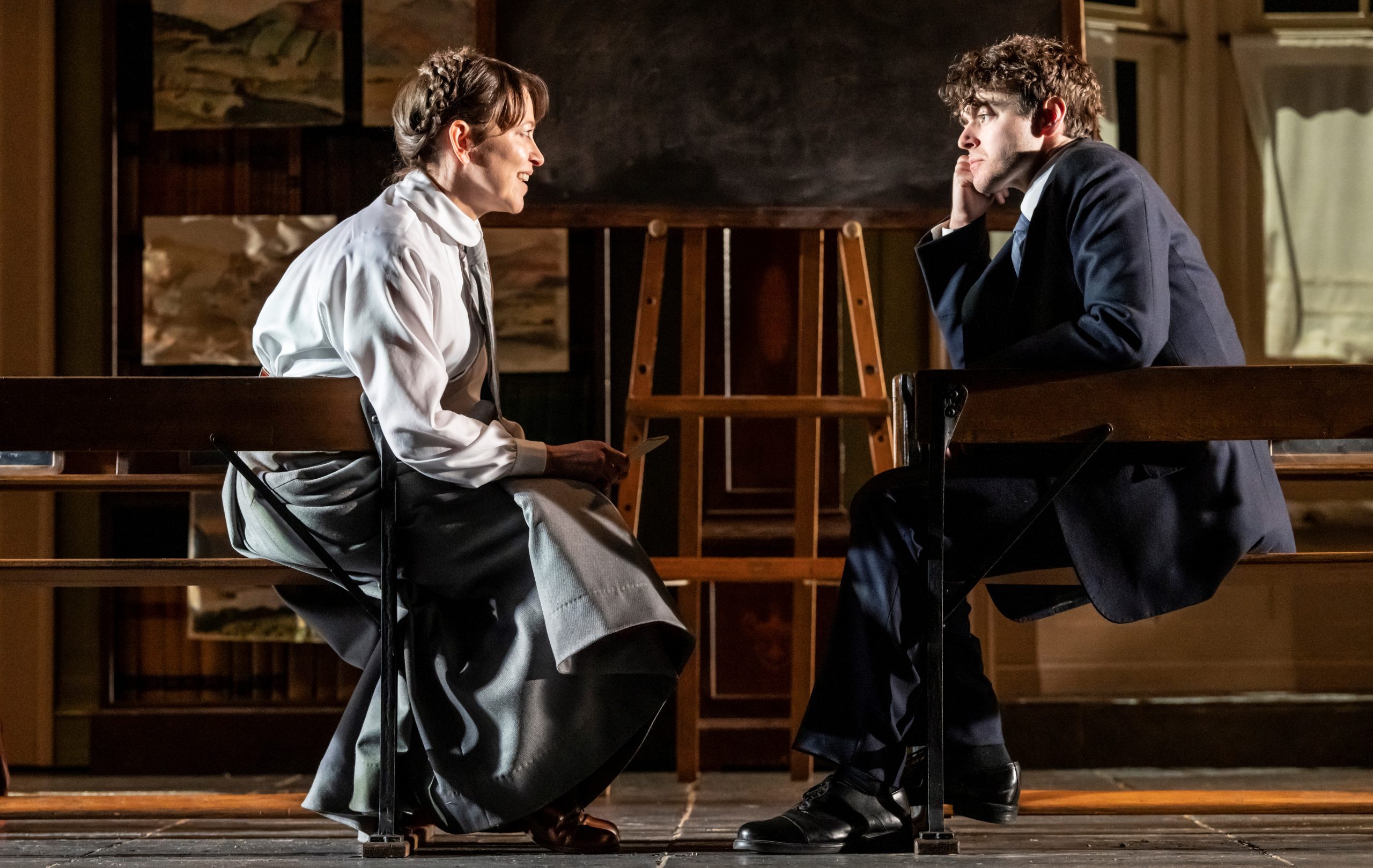 WE ALL know how our lives can be transformed by an inspirational teacher. Miss Moffat is just such a teacher in The Corn is Green, which is running at London’s National Theatre.

She is an Englishwoman who turns up on a bike in Glansarno, a small village in a remote Welsh countryside, and stumbles across a few lines written by Morgan Evans, an orphan who can only look forward to a life in the mines, which have already claimed the lives of his three brothers and his father. The boy is self-taught and has terrible spelling and grammar, but in the few words he can manage, Miss Moffat detects a spark.

Over a period of three years in the latter part of the 19th century, Miss Moffat makes it her mission, despite all the odds, to prepare her promising protégé for higher education. She lights the flame of knowledge. Finally, she puts him up for a scholarship at Oxford. It has to be remembered that as an Englishwoman, Miss Moffat is considered an immigrant outsider. Such was the prejudice that Evans had described his late father as a “mongrel” because he had a “dash of English”.

The Corn is Green is a semi-autobiographical play published in 1938 by the Welsh dramatist and actor Emlyn Williams. It premiered that year at the Duchess Theatre in London. Williams was born in 1905 and grew up in the impoverished coal-mining town of Mostyn in Flintshire, Wales, and spoke only Welsh until the age of eight. He probably would have become a miner, but he came to the notice of Sarah Grace Cooke, a London social worker who had established a school in Mostyn. She recognised his potential and spent seven years as his personal tutor. She worked on his English and sent him to Switzerland to learn French. At 17, she helped him win a scholarship to Christ Church, Oxford.

When he suffered a breakdown, she encouraged him to write as a way to recover. His first play, Full Moon, was produced while he was still at university. His first success, A Murder Has Been Announced, was staged in 1930, followed by the hit thriller, Night Must Fall (1935). However, The Corn Is Green is considered his most enduring literary achievement.

In the National Theatre production of The Corn is Green, Nicola Walker, who is known to TV audiences, is exceptional as Miss Moffat, and has some moving scenes with her young student, played by Iwan Davies.

The miners, with faces black with coal dust, reminded me of a film I watched as a small boy at St Xavier’s School in Patna, India. How Green Was My Valley depicted life in a Welsh village. It was made in 1941, based on a novel published in 1939 by Richard Llewellyn. The main character, Huw Morgan, narrates the tale of a Welsh mining village.

The Corn is Green had been published a year earlier.

Frustrated by the hostility Miss Moffat encountered in setting up a school, she starts tearing up the exercise books and throwing them in a waste paper basket. But there is something in the last book that catches her eye.

She reads the lines: “The mine is dark…If a light come in the mine…the rivers in the mine will run fast with the voice of many women; the walls will cave in, and it will be the end of the world.”

Evans, who is about to leave the room, stops, but Miss Moffat goes on reading from the book without noticing him: “…so the mine is dark…But when I walk through the Tan – something – shaft, in the dark, I can touch with my hands the leaves on the trees, and underneath…where.”

She carries on: “…There is a wind in the shaft, not carbon monoxide they talk about, it smells like the sea, only like had fresh flowers lying about…and that is my holiday.”

At first, Evans won’t even admit he had written the words.

She tells him to take his cap off and address her not as “Miss” but “Miss Moffat” and ticks him off for his poor spelling. Then asks if he lives with his parents.

He replies: “No. By me own self. My mother is dead, and me father and me four big brothers was in the Big Shaft Accident when I was ten.”

“Killed?”
“Oh, yes, everybody was.”
She asks: “Have you ever written anything before this exercise?”
“No.”
“Why not?”
He says: “Nobody never ask me to. What iss the matter with it?”

Miss Moffat sits down, looking thoughtfully at the book: “Nothing’s the matter with it. Whether it means anything is too early to say, but it shows exceptional talent for a boy in your circumstances.”

Miss Moffat: “This shows that you are very clever.”

There is electricity in the air.

Two years later, after Evans had been taking daily lessons, Miss Moffat persuades the village squire (played to perfection as a comic fool by Rufus Wright) to support the boy.

He suggests: “If this boy really is clever, it seems a pity for me not to do something about it, doesn’t it?”

He has in mind a lowly office job, but Miss Moffat shocks him by revealing she has something rather more ambitious in mind: “A scholarship to Trinity College, Oxford, open to boys of secondary education in the British Isles. My school hardly comes under the heading of secondary education, and I wrote to your brother at Magdalen, he pulled some strings for me, and they agreed to make a special case of this boy, on one condition. That you vouch for him. Will you?”

But there follows a crisis when Evans rejects the notion of cleaning his fingers with a nail file or learning Greek: “I am going back to the coal mine.”

His explanation: “…because I was born in a Welsh hayfield when my mother was helpin’ with the harvest – and I always lived in a little house with no stairs only a ladder – and no water and until my brothers was killed I never sleep except three in a bed. I know that is terrible grammar but it is true.”

But ultimately, he resumes his studies, and sits an entrance paper for Oxford. He does win the scholarship but his plans are very nearly derailed when Bessie Watty (played by Saffron Coomber), who seduced him on the night he had the bust up with Miss Moffat, reveals he is the father of her baby.

Evans has to be convinced his “duty” is not to marry Bessie, but to make something of himself at Oxford.

It is an emotional climax when Miss Moffat tells him: “There is no reason why you should ever come to Glansarno again; you have been given the push over the wall, and you have grown out of this already.”

She says: “No, Morgan Evans, you have no duty to me. Your only duty – is to the world.”

She adds: “Now you are going, there is no harm in telling you something. I don’t think you realise quite how exceptional you are, or what your future can become if you give it the chance…You have brains, shrewdness, eloquence, gentleness and enough personality: and Oxford will give you enough of the graces. The lessons are over.”

Morgan: “I shall – always remember.”

Miss Moffat shakes her head with a smile: “Will you? Well, I’m glad you think you will.”

This is a play for Asian immigrants who often worked in factories when they first arrived in Britain. What they understood was the value of scholarship and, however long the hours they had to work, made sure their children were educated. They will love this play as much as I did.