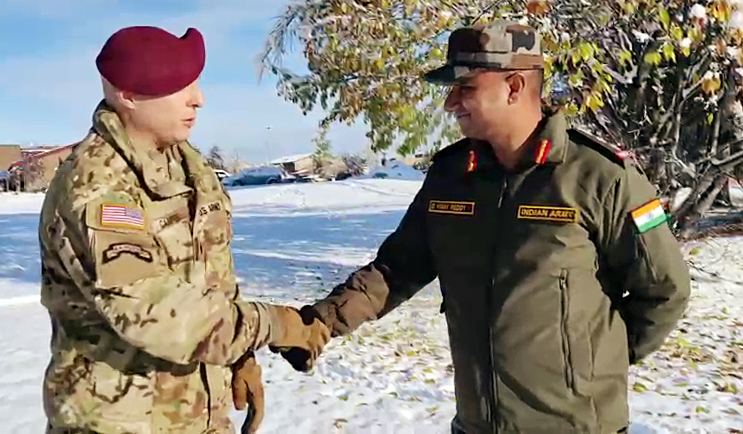 Indian Army’s 7 Madras battalion commanding officer exchanges greetings with his US counterpart during Exercise Yuddha Abhyas, in Alaska, the US, on Saturday, October 17, 2021. (ANI Photo)

INDIAN and US soldiers on Saturday (17) played friendly matches of kabaddi, American football, soccer and volleyball as part of “ice-breaking activities”.

Four mixed outfits, comprising troops from both countries, played a number of friendly games with true sportsmanship spirit, sources in the Indian Army said. While the Indian troops tried their hand at American football, their American counterparts took part in kabaddi, a popular Indian sport.

Both sides came to know each other more through the sporting activities, which will be important for their upcoming activities such as firing, rappelling and the final validation exercise, the Indian Army said.

#WATCH | As part of 'Ice-breaking activities', Indian Army contingent and American contingent participated in friendly matches of Kabaddi, American Football and Volleyball at Joint Base Elmendorf Richardson, Anchorage, Alaska (US)

The events were held amid the 17th edition of the India-US joint training exercise ‘Ex Yudh Abhyas 21’ which started at Joint Base Elmendorf Richardson in Anchorage, Alaska, on Friday (15). The 14-day exercise includes joint training for operations under the United Nations mandate, the Indian Army added.

“This exercise is another step in the growing military cooperation between the two countries. The exercise aims at enhancing understanding, cooperation and interoperability between two armies,” the army said, according to news agency Press Trust of India. The Indian contingent comprises 350 personnel of an infantry battalion group of the army. The US contingent, on the other hand, comprised 300 soldiers belonging to the First Squadron (Airborne) of the 40th Cavalry Regiment.

India’s defence ties with the US have been on an upswing in the last few years. In June 2016, the US had designated India a “Major Defence Partner”. The two countries have signed key defence and security pacts over the past few years, including the Logistics Exchange Memorandum of Agreement (LEMOA) in 2016 under which their armies can use each other’s bases for repair and replenishment of supplies and provides deeper cooperation.