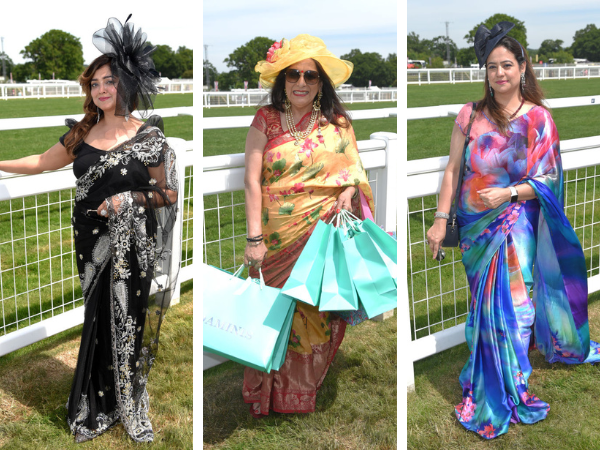 IN a moment that would make every Sari-loving Indian ecstatic, hundreds of women – mostly doctors and bankers – of Indian origin turned up at Britain’s Royal Ascot race meeting on Thursday (16) wearing the traditional Indian attire.

At the event which is often attended by the Queen, the sari-clad women displayed India’s culture on a global platform to highlight the condition of Indian weavers, particularly after the Covid pandemic which has hurt them.

The saris worn by the women guests featured various themes – ranging from health workers to hijab. Through their attire, the diversity of India was fully represented at Britain’s Ascot, an event where the world’s most fashionable people meet. The event normally witnesses women wearing dresses and striking hats.

Sanchita Bhattacharya, who works in the media, wore a Madhubani hand-crafted silk sari that featured the Pandavas and Krishna from the epic Mahabharata.

Chinu Kishore, a civil engineer at British Railways, wore a ‘Mekhala sador’ — an Assamese traditional weave — to represent the north-eastern Indian state on a global platform.

Another woman wearing a white sari with Tricolor border said she was being called Miss India at the event because of the Tricolour flavour of her sari. “I feel so proud,” she said.

Over 1,000 women, most of whom are either National Health Service (NHS) doctors or bankers or professionals, took a day off from work to take part in the event.

The sari show was a brainchild of NHS doctor Dipti Jain. “We are saree-loving girls and the idea came up after setting up a charity to help artisans and weavers, especially after the pandemic in India,” she said.