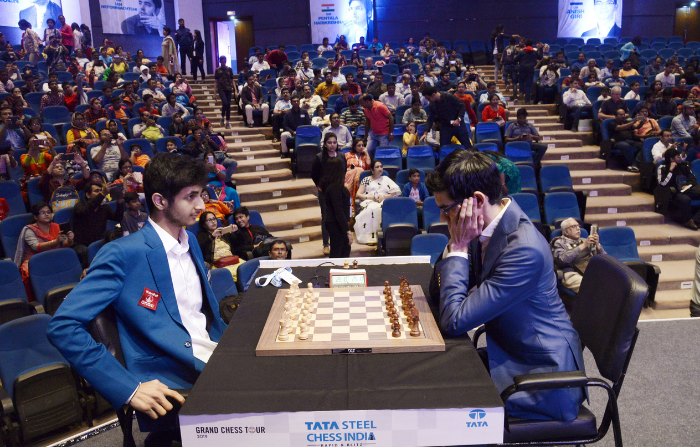 INDIA on Monday (13) held off a spirited Ukraine via the tie-breaker to enter the semi-finals of the FIDE Online Chess Olympiad with B Adhiban, D Harika and Nihal Sarin playing key roles.

The blitz tie-break saw India outclassing its opponent 5-1, thanks to victories for Adhiban, Harika, Sarin and R Vaishali.

In the blitz tie-break, Adhiban defeated Kirill Shevchenko in 36 moves in a Larsen Indian variation game. The Ukraine player held his own in the two regular games, drawing against P Harikrishna and beating Gujrathi.

The Ukrainians bounced back after losing the first round 2-4 by beating the Indians 3.5-2.5 to force the blitz tie-breaks.

In the second round, R Praggnanandhaa, playing in place of Sarin, posted the first victory for India, beating Platon Galperin with white pieces.

The young grandmaster secured a win in just 20 moves in a Sicilian variation game.

Harika extended India’s lead by getting the better of Natalia Zhukova in 32 moves with white pieces. She had beaten her opponent in the first game of the quarterfinal.

While Anand drew a second straight game against long-time rival Ivanchuk, Gujrathi who came in for P Harikrishna lost to Shevchenko.

However, Humpy’s defeat at the hands of IM Iulija Osmak in a marathon 114-move game secured a win for the Europeans.

In the first set of matches, Anand and Ivanchuk played out a draw while Harikrishna, Humpy and Vaishali also shared honours with their respective opponents. Harika and Sarin registered key wins over Natalia Buksa and Galperin.

India awaits the winner of the US-Kazakhstan quarterfinal to be played on Tuesday (14).