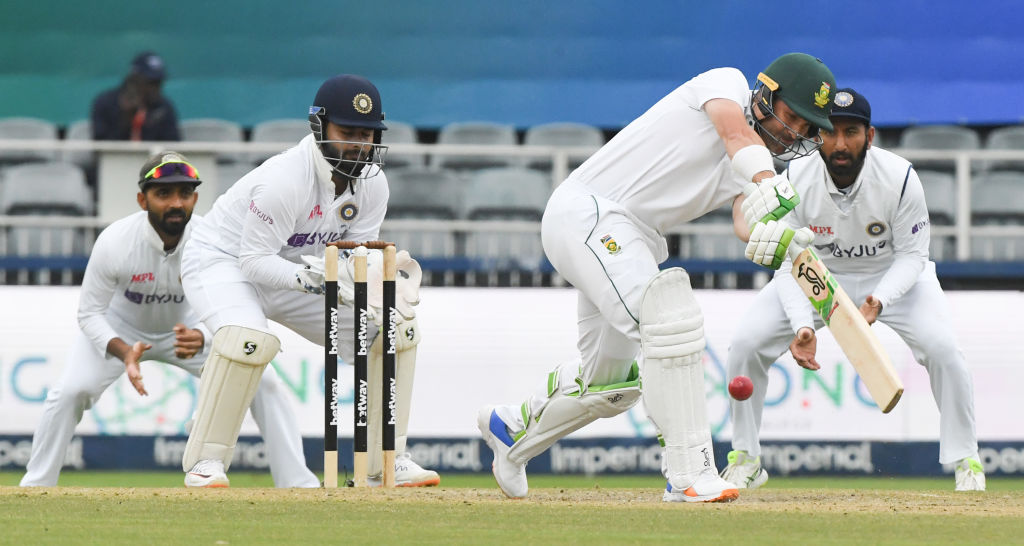 South Africa captain Dean Elgar plays a shot on Day 4 of the second Test match against India at the Wanderers Stadium in Johannesburg, South Africa, on January 6, 2022. (Photo by Sydney Seshibedi/Gallo Images/Getty Images)

SOUTH AFRICA captain Dean Elgar’s determined 96 not out saw the hosts beat India by seven wickets on the fourth day of the second Test at the Wanderers Stadium in Johannesburg on Thursday (6) to level the three-match series 1-1.

The third Test begins in Cape Town on January 11.

The Proteas resumed from their overnight score of 118 for 2 on a rain-curtailed day with their two unbeaten batters Elgar and Rassie van der Dussen (40) seeing off the India bowlers in the shaky moments when the ball moved off the surface that contained a lot of moisture.

Elgar brought up his half-century with a boundary and the two added 82 runs for the third wicket before Mohammed Shami picked van der Dussen who was caught by Cheteshwar Pujara in the slips.

But the home team ensured that they lost no more wicket as Elgar and the in-form Temba Bavuma (23 not out) added 68 runs for the fourth wicket to take their side home. The Indian bowlers went for runs as they desperately tried to pick wickets. Shardul Thakur, who picked a record-bettering seven wicket-haul in the first innings, failed to take more than one wicket in the second essay. Elgar was adjudged the player of the match.

India won the first match in Centurion by 113 runs and now will have to put up a good show in Cape Town if they are to win their first Test series in South Africa.

They played the Johannesburg Test without their regular captain Virat Kohli and KL Rahul led the side.

South Africa picked 12 points in the World Test Championship as a result of the win.