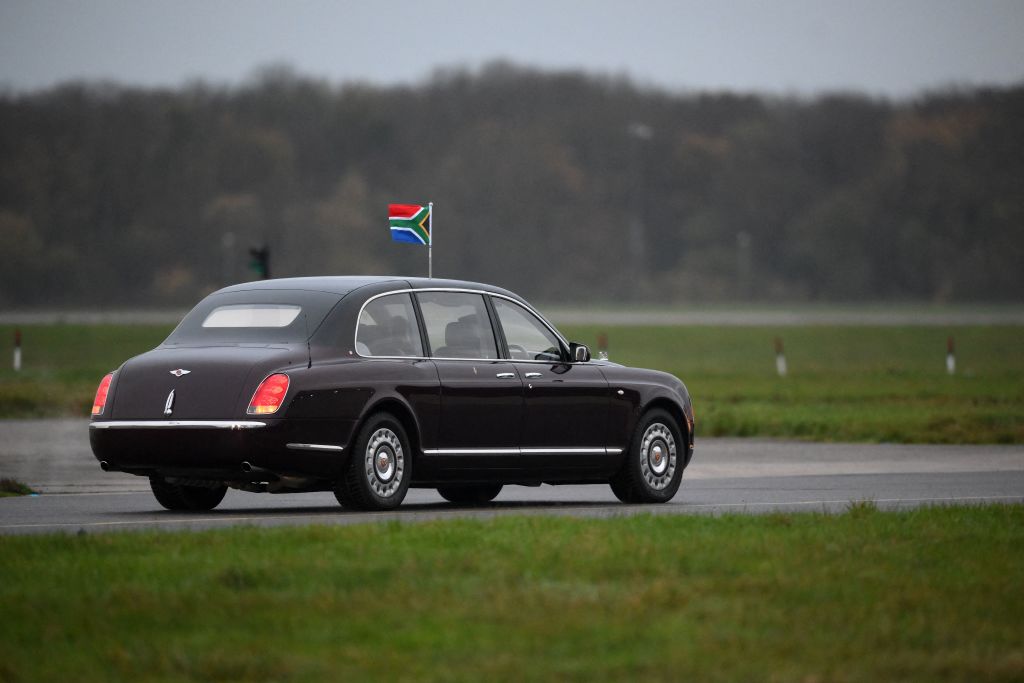 South African president Cyril Ramaphosa leaves in a car after arriving at Stansted airport in London on November 21, 2022. – King Charles III is hosting his first state visit as monarch, welcoming Ramaphosa and his wife to Buckingham Palace. (Photo by DANIEL LEAL/AFP via Getty Images)

South African president Cyril Ramaphosa on Monday (21) landed in Britain ahead of the first state visit hosted by King Charles III as monarch.

Ramaphosa arrived at London Stansted airport on a South African Air Force jet, and was met by a British military guard of honour.

The official programme starts on Tuesday and will include a state banquet at Buckingham Palace.

The last state visit to the UK came in June 2019, when queen Elizabeth II hosted US president Donald Trump and his wife Melania.

The pomp of the major diplomatic event, however, will be clouded by events in South Africa, where Ramaphosa risks impeachment for allegedly covering up a crime.

Climate change, trade and Charles’s vision for the Commonwealth are expected to be on the agenda.

Ramaphosa was last in London for the state funeral of the queen at Westminster Abbey in September.

His state visit comes more than a decade after the last by a South African leader, when Jacob Zuma came to the UK in 2010.

Charles and Queen Consort Camilla will be in charge of welcoming Ramaphosa and First Lady Tshepo Motsepe but will also see the visiting couple meet other senior royals.

Heir to the throne Prince William and his wife Kate, Princess of Wales, will take him to join Charles and Camilla for a ceremonial military welcome.

Also on the agenda is an address to lawmakers from both houses of parliament and a meeting with Prime Minister Rishi Sunak in Downing Street.

Ramaphosa was Zuma’s deputy in 2014 and gained the presidency in 2018.

But he is currently fighting for his political life and facing calls to resign as the deeply divided ruling party African National Congress (ANC) is to hold a vote on its leadership in December.

A scandal in which Ramaphosa is accused of concealing a multi-million dollar cash theft has piled pressure on him.

He faces an accusation that he failed to report a heist at his luxury cattle farmhouse in which robbers took $4 million in cash and instead organised for the robbers to be kidnapped and bribed into silence.

The president has acknowledged a burglary but denies kidnapping and bribery, saying he reported the break-in to the police.

A panel appointed by South Africa’s parliament is set to determine whether to impeach him.