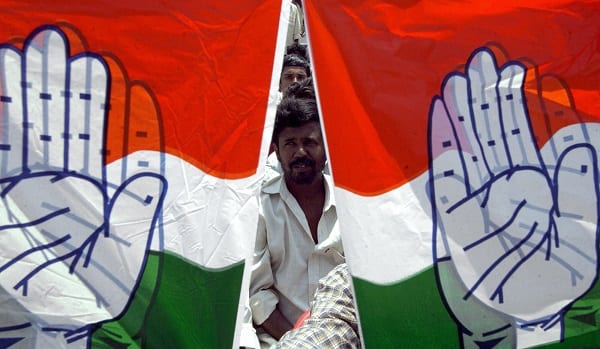 According to Superintendent of Police (city) Dinesh Tripathi, Congress workers were holding a meeting in front of the party office at a time when prohibitory orders were promulgated in the city and 80 of them have been arrested (Photo: INDRANIL MUKHERJEE/AFP/Getty Images).

ABOUT 80 Congress workers were arrested on Monday while holding a public meeting ahead of a march they had planned in support of  the student who has accused BJP’s former Union minister Chinmayanand of rape, police said.

Accusing the Uttar Pradesh Police of blocking the march, the Congress said its leaders, including former Union minister Jitin Prasada, were detained. District borders of Shahjahanpur have been blocked from all sides, the opposition party added on its official Twitter handle. Party leaders have planned a 180-km march from Shahjahanpur to Lucknow.

According to Superintendent of Police (city) Dinesh Tripathi, Congress workers were holding a meeting in front of the party office at a time when prohibitory orders were promulgated in the city and 80 of them have been arrested.

“They had not taken any permission from the administration. After arrest, they have been taken to Police Lines,” Tripathi said.

Heavy police force was deployed at the Congress office in view of the march and roads leading to it were barricaded. However, many Congress workers reached the spot and started a public meeting.

Mishra claimed he and Prasada were under house arrest.

“SDM (sub-divisional magistrate) Sadar and CO (circle officer) City told me that I and Jitin Prasada have been put under house arrest. When they were asked as to why a heavy police force was deployed outside residence of Prasada, we were told that no one will be taking out any padyatra,” Mishra told.

Mishra claimed authorities told him that no one would be taking out any rallies.

There was heavy police deployment outside the residence of Prasada from 10 in the morning.

“UP is no Kashmir yet today I am in preventive custody for simply wanting to highlight the plight of the Shahjahanpur rape victim. This BJP govt has no qualms in quashing an individual’s fundamental rights,” he tweeted.

Congress general secretary Priyanka Gandhi Vadra alleged that criminals in UP have the protection of the government so they can intimidate the rape victim.

“The UP BJP government wants to suppress the voice seeking justice for the daughter of Shahjahanpur. The padyatra is being stopped. Our workers and leaders are being arrested. What is there to be afraid of?” the Congress general secretary in-charge UP East said in a tweet in Hindi.

The student was on Wednesday arrested on charges of extortion and sent to 14 days judicial custody. Hours later, her bail plea was rejected.

Chinmayanand, sent to judicial custody after his arrest, has been booked under section 376C of the Indian Penal Code (IPC), a charge with lesser punishment than rape.

Speaking to reporters in Lucknow on Sunday, Aradhana Mishra, deputy leader of the Congress Legislative Party in the Uttar Pradesh Assembly, said the Congress will take out a 180-km march from Shahjahanpur to Lucknow on Monday.

“The Congress demands that the hearing of the rape case against Chinmayanand be taken up in a fast-track court,” Mishra had said, adding that the priority of the opposition party was to ensure that justice was delivered to the woman.