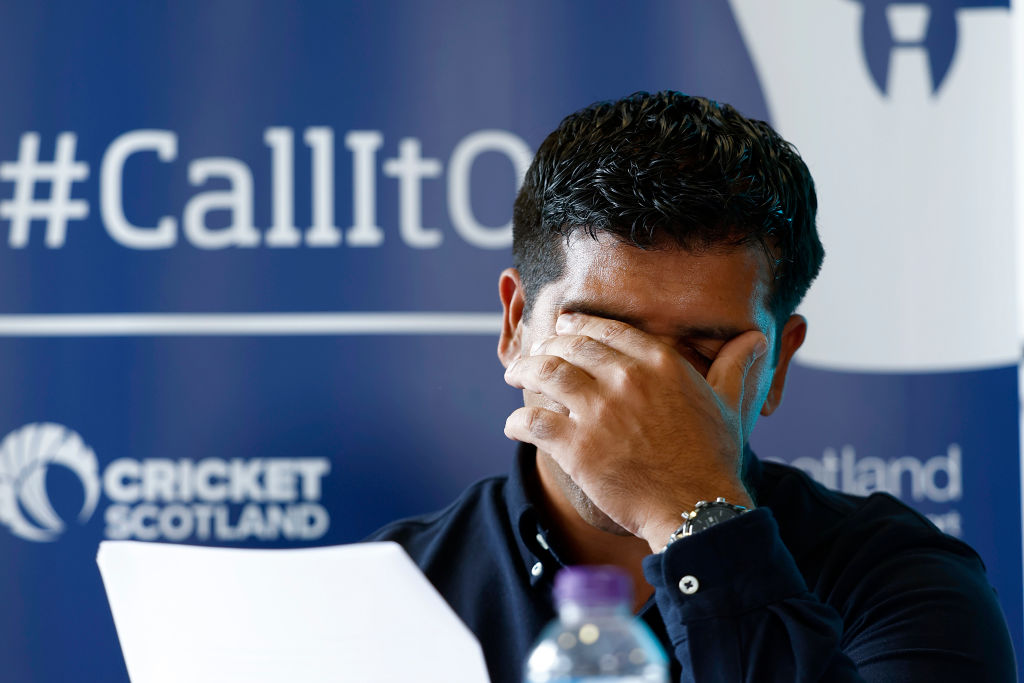 Cricketer Majid Haq speaks during a news conference with Qasim Sheikh and lawyer Aamer Anwar at the Stirling Court hotel on July 25, 2022 in Stirling, Scotland. Plan4Sport, the organisation that leads the independent review into racism in Scottish Cricket, published its report on racism in the sport. The report vindicated claims made by two Scottish players of Pakistani origin, Majid Haq and Qasim Sheikh, who have both suffered from institutional racism in Scottish Cricket. (Photo by Jeff J Mitchell/Getty Images)

CRICKET Scotland is “institutionally racist”, an independent review into allegations of racism against the sports body has found.

The damning report, which was described as a “wake up call for Scottish sport”, found 448 examples of institutional racism.

The report was carried out by consultancy firm Plan4Sport, and Cricket Scotland failed in as many as 29 out of 31 tests used to measure the scale of the problem.

“Governance and leadership practices of Cricket Scotland have been institutionally racist,” said Louise Tideswell, managing director of Plan4Sport.
“The reality is that the leadership of the organisation failed to see the problems and, in failing to do so, enabled a culture of racially aggravated micro-aggressions to develop.” “I also want to add that whilst the governance and leadership practices of the organisation have been institutionally racist, the same should not be said for cricket in Scotland.

“There are many outstanding clubs and individuals delivering local programmes which truly engage with diverse communities.” On Sunday (24), directors of the Scotland cricket board resigned en masse following accusations of institutional racism.

Cricket Scotland’s interim chief executive officer, Gordon Arthur, described the report’s findings as a “watershed” moment for the sport, and issued a “heartfelt apology to all those who have been the victims of racism and discrimination in Scottish cricket”.

“The racism and discrimination that has taken place in the sport that we all love should never have been allowed to happen, or to go unchallenged for so long,” Arthur said.

“We recognise the impact this will have had on individuals and their families. We hope the report provides them with some reassurance that their voices have been heard, and we are sorry this did not happen sooner.” The review was commissioned after Haq, in an interview to Sky Sports last November, alleged that the cricket board was “institutionally racist”.

Haq’s former teammate Sheikh, who also represented Scotland, too spoke of the abuse that both had suffered during their cricketing careers.