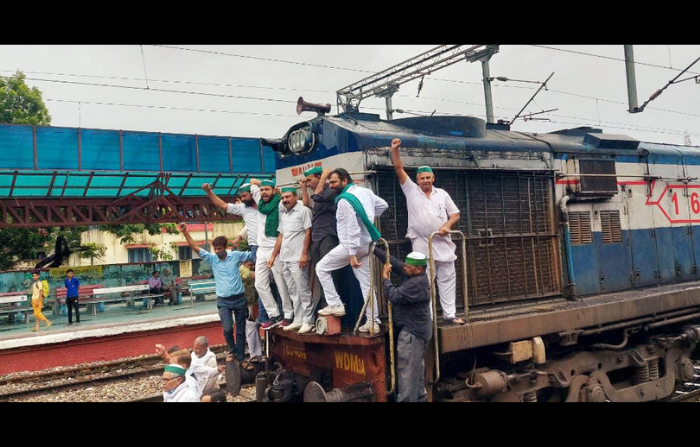 Farmers stand on a locomotive during a rail-traffic blockade protest at Modi Nagar railway station in Ghaziabad in the northern Indian state of Uttar Pradesh on Monday, October 18, 2021. (ANI Photo)

A RAILWAY traffic blockade (rail roko) put up on Monday (18) by India’s protesting farmers across the states of Punjab, Haryana and Rajasthan over the Lakhimpur Kheri violence of October 3 has resulted in cancellation of 50 trains across 130 locations, sources in the Indian Railways told news agency Asian News International. The farmers have demanded the dismissal and arrest of India’s minister of state for home affairs Ajay Mishra in connection with the incident.

Protest on railway tracks was also witnessed in the northern state of Uttar Pradesh where the violence took place after a car of a convoy ran over a group of protesting farmers, killing four of them. The angry crowd retaliated by thrashing four persons to death and setting vehicles on fire. The administration of UP warned of strict measures against those who were found to be disrupting normalcy, additional director general of police, law and order, Prashant Kumar said, according to the news agency.

The farmers, who have been staging protests for several months now against three new agricultural laws of the Narendra Modi government at the Centre, were staging the blockade over six hours that were set to conclude at 4 pm local time.

The agitation has been staged by the Samyukt Kisan Morcha (SKM), an umbrella body of several farmers’ unions which has been spearheading the farmers’ protest since last year.

The agitating farmers have been demanding the resignation of Mishra over the incident as his son Ashish has been accused of sitting in the vehicle (owned by the minister) that mowed down the protesters. Both the Mishras have denied the allegations with the minister saying that his son was at a different place when the incident took place. Ashish was arrested and sent to jail on October 9 after he initially failed to turn up before the police.

Press Trust of India reported that in the North Western Railway zone, train traffic was disrupted in some sections of Rajasthan and Haryana with two trains getting cancelled, 13 partially cancelled and one diverted because of the protest.

In Rajasthan, train movements at Hanumangarh and Sriganganagar under the Bikaner subdivision were hit by the disturbance.

‘Government has not spoken yet’

On Monday, Rakesh Tikait of the Bharatiya Kisan Union told ANI that the Indian government has not spoken to them over the demand of the dismissal and arrest of the central minister in connection with the Lakhimpur Kheri violence.

“This protest is being staged in different districts across the country. The people of the country who support this movement know about the Rail Roko andolan. The central government has not spoken to us yet in this matter,” he said.

A statement issued by the umbrella body of farmers’ unions on Sunday read, “To press for its demand for Ajay Mishra’s dismissal and arrest, so that justice can be secured in Lakhimpur Kheri violence, SKM has announced a nation-wide rail roko program on October 18.”

“SKM put out a call to its constituents to stop rail traffic for six hours on October 18, between 10 am and 4 pm. SKM asked for this action to be taken up peacefully, without any destruction and damage of any kind to any railway property,” it added.