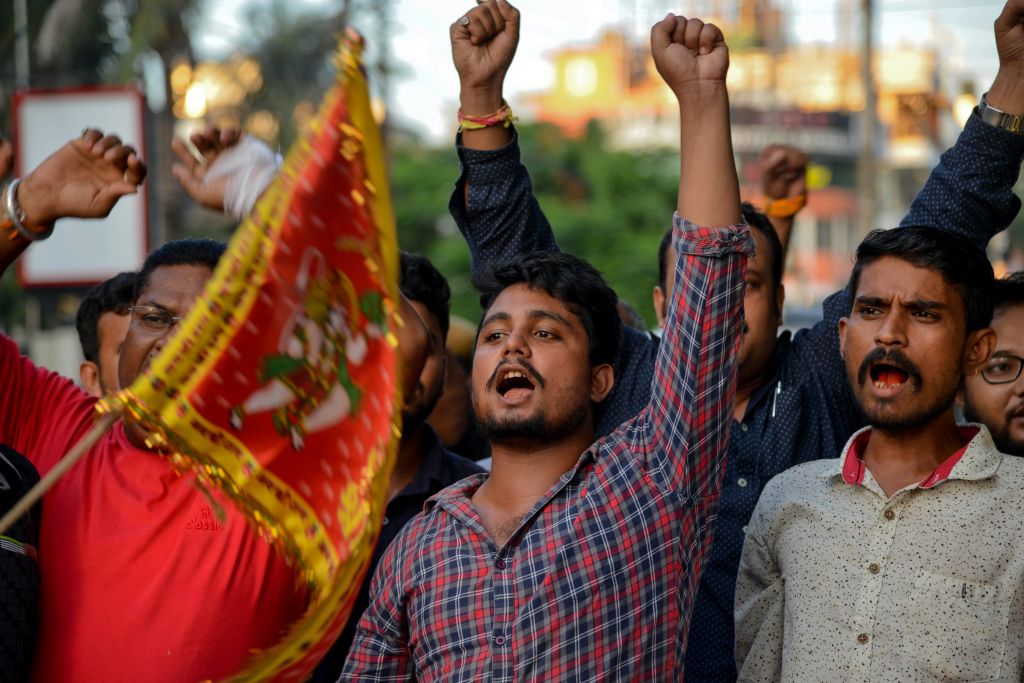 Hindutva activists at a protest in India. (Photo by BIJU BORO/AFP via Getty Images)

IN a shocking incident, a Muslim man and a married Hindu woman who were travelling together were forced to get off from a train by members of the Hindu right-wing Bajrang Dal and handed over the railway police personnel.

It happened on January 14 in Ujjain in the central Indian state of Madhya Pradesh. The man from the minority community was accused of “love jihad” (a Islamophobic conspiracy theory encouraged by Hindutva proponents) and even assaulted before being taken off from the Ajmer-bound train.

The duo, who are family friends from Indore in the same state, were questioned by the railway police officials and made to sit at the police station till their parents arrived. They were later released after their statements were recorded. The man was identified as Asif Shaikh, owner of a small electronic shop, while the woman is a teacher who works at a private school.

The railway police said no offence was registered against the Bajrang Dal members as there was no complaint.

In one of the videos of the event that went viral on social media, three persons, who identified themselves as Bajrang Dal members, were seen dragging Shaikh out of the train compartment. The woman was seen walking behind them as they took the man to the police.

In another video which was recorded inside the police station, the woman is found screaming at one of the members who targeted them. She tells them that their misunderstanding could spoil her life. She said she is an adult and teaches children. However, one of the assailants is seen telling her that he is not talking to her.

Railway police superintendent Nivedita Gupta said Shaikh and the woman were family friends and had known each other for years, the Indian Express reported.

“After they were brought in to the police station by Bajrang Dal men, who alleged ‘love jihad’, we recorded their statements and as they were both adults and there was no offence, they were let go,” said Gupta.

Kundan Chandrawat, Prachar Pramukh for Malwa Prant of Vishwa Hindu Parishad, of which Bajrang Dal is the students’ wing, said they had “information through reliable sources that a Hindu woman was being misled by a Muslim man and taken along with him”.

“It is for the protection of our Hindu sisters that our workers intervened…. That is when the man got aggressive. They just took him to the nearest police station. During the process, the man and workers got into a small tussle, but no one was beaten up. They handed over the two and left,” he was quoted as saying by the Express.