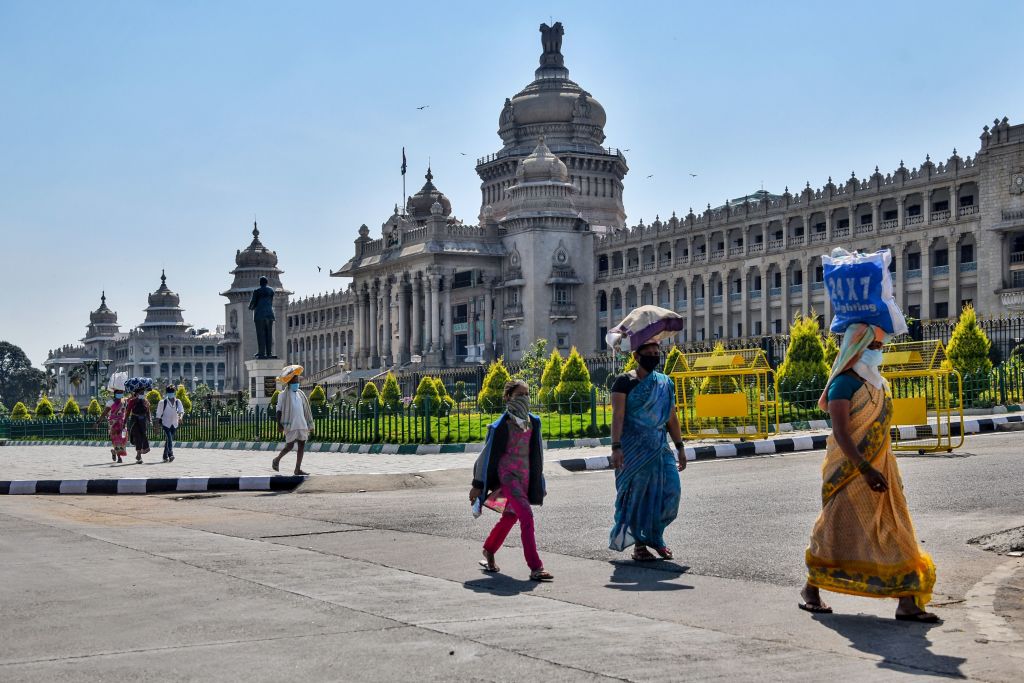 Daily wage labourers and their families carrying their belongings walk past the Vidhana Soudha building in Bengaluru, the capital of the southern state of Karnataka, during a nationwide lockdown in March 2020. (Photo by MANJUNATH KIRAN/AFP via Getty Images)

THE kin of those from below poverty line (BPL) families in Yadgir district of the southern Indian state of Karnataka who died from coronavirus have complained that the compensation cheques of Rs 1 lakh (£992) that they received from the state government have bounced, The Indian Express reported.

The families said their banks cited various reasons for such an occurrence and they have been left running from pillar to post for a solution.

Karnataka chief minister Basavaraj Bommai, who belongs to prime minister Narendra Modi’s Bharatiya Janata Party (BJP) told reporters on Friday (21) that he had received reports regarding the cheques bouncing and has asked his officials to resolve the matter immediately.

“Cases have only been reported from Yadgir district. I have told officials to immediately release the compensation,” he said in state capital Bengaluru.

Last month, Narasimha Nayak, the state lawmaker from Shorapur constituency in Yadgir, handed over the cheques to the family members of the victims of coronavirus.

Speaking to The Indian Express Friday, Nayak said, “The (victims’ families) brought the issue to my notice on Thursday and I am talking to senior officials to check the issue and immediately release the compensation. This is an embarrassment to the government.”

Anita, whose father Basana Gowda died from Covid last year, had received a State Bank of India (SBI) compensation cheque from Nayak. She had deposited the cheque in her bank – the Karnataka Gramin Bank – and was waiting for the money to be credited. But when she went to enquire, the bank officials asked her to contact SBI, India’s largest bank.

According to Anita, officials at the SBI branch in Yadgir could not give her details on the cheque.

“After a few days, I received a cheque. The receipt said the cheque had bounced for ‘other reasons’,” she told the Express.

Hanumanthu, another recipient of the compensation cheques, also had a similar story to tell. Relative of Mahadevi who succumbed to the disease, said his cheque bounced back for ‘other reasons’.

“We have been asking bank officials why the cheque bounced, but they are not responding properly. Now we don’t know how to get the money… officials at the bank and taluk are not helpful,” he said.

Karnataka’s former chief minister B S Yediyurappa had announced a death compensation of Rs 1 lakh to BPL families who lost their earning members to the pandemic.