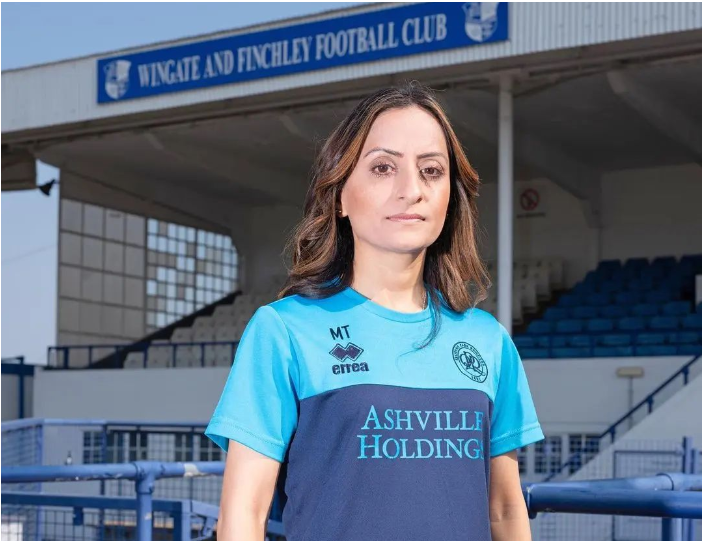 Manisha Tailor been named as QPR’s Community Captain in recognition of her incredible work in becoming Assistant Head of Coaching at the club. Manisha is the first woman of South Asian heritage to hold such a role in the English game.

The Community Captain accolade is being given to more than 100 members of the public who have made an outstanding contribution to their club and local community, as part of the Premier League’s 30th anniversary celebrations.

Presentations to the Captains form part of the Premier League Trophy Tour, which is visiting more than 50 professional, non-league and women’s clubs across England and Wales who receive funding from the Premier League.

Manisha received the accolade at the club’s training ground in Heston. She was awarded a PL30 Community Captain armband and pennant. A plaque engraved with Manisha’s name was also added to the Premier League Trophy plinth.

Chris Ramsey, QPR’s Head of Coaching, who presented Manisha’s Community Captain award, said: “I am so pleased for Manisha. She came in and learnt all about the club and our philosophy, and completed her badges to become a better coach. She has shown that if you put your mind to something and work hard, you will succeed.

“She has also found time to work in the local community and we are all very proud of her and the positive attention she has brought to the club.

“When you have leadership like we have at the club in terms of the Board, Lee Hoos (CEO) and Les Ferdinand (Director of Football), who champion people who work hard and don’t put barriers in their way, it shows what can be achieved.

“We are seen as a model of diversity which means a lot to us as a football club.”

Upon receiving the award, Manisha said: “I am very proud but this award isn’t just for me, it is reflective of what the club does as a whole. QPR ensures there is opportunity for all and I am definitely an example of that.

“If it wasn’t for the support of Chris and Alex Carroll (Academy Director) I wouldn’t be in the position that I am now. The support they have given will always live with me.”

Premier League Chief Executive Richard Masters said: “As we mark 30 years since the Premier League first kicked off, it is important we celebrate the unsung heroes who deliver brilliant work in their communities. These people – whether they are participants, coaches, volunteers or long-time employees – are the lifeblood of their clubs and their communities.

“The continued success of Premier League football enables us to provide unprecedented investment in communities and wider football. As we look to the future, we are committed to investing more than ever, to help develop the game and provide opportunities to people of all ages.”

Over the next three years, the League will continue its world-leading levels of support by contributing £1.6 billion to communities and the wider game.

During the Trophy Tour, the League will be announcing new financial commitments to benefit fans and communities. This includes increased investment into the Premier League Fans’ Fund, with £5m available to support fan engagement projects across the top four divisions of the football pyramid. The League is also investing an additional £13.5 million into the Football Foundation to create small-sided pitches in the heart of communities that need them the most. The tour will also give an opportunity to highlight new Premier League investment into women’s and girls’ football, including the Emerging Talent Centres announced earlier this summer.