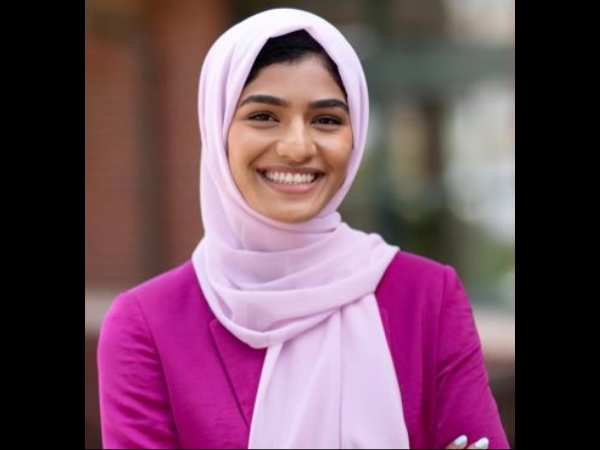 Indian-American politician Nabeela Syed has made history in the November 8 mid-term elections in the US by becoming the youngest member to get elected to the Illinois general assembly.

The Muslim woman of Indian origin received 52.3 per cent votes in the election for the 51st District in the Illinois State House of Representatives.

She later said in a tweet, “My name is Nabeela Syed. I am a 23-year-old Muslim, Indian-American woman. We just flipped a Republican-held suburban district.” She added, “And in January, I’ll be the youngest member of the Illinois General Assembly.”

And in January, I’ll be the youngest member of the Illinois General Assembly.

In another post, she said, “Thank you thread incoming tomorrow. We had an incredible team that made this possible.”

Thank you thread incoming tomorrow. We had an incredible team that made this possible. 💙

Syed also penned a long note on Instagram about her journey. She said, “When I announced for State Representative, I made it a mission to genuinely engage in conversation with people – to give them a reason to get involved in our democracy and hope for better leadership that represents their values.”

She added that she won this race “because we engaged in that conversation.”

Thanking everyone for their support, Syed said, “I knocked every door in this district. Tomorrow, I start knocking them again to thank them for placing their trust in me. I’m ready to get to work.”

In June, Syed was declared the winner in the Democratic primary election against Chelsea Laiberte Barnes who she defeated comprehensively.

Syed was born in Palatine in Illinois and did her graduation from the University of California, Berkeley, where she received a degree in political science and business administration. There, she also served as the president of a pro-bono consulting body aiding local businesses and nonprofits.

She has been an active member in her religious community at the Islamic Society of Northwest Suburbs and works on advocating interfaith dialogue and empowering young Muslim women to take up leadership roles.

She has worked with various organisations such as EMILY’s List to raise money to elect Democratic members to the Congress, according to her website.

She also works for a non-profit in digital strategy which supports a variety of their civic-engagement efforts, including voter mobilisation, tackling sexual assault on college campuses, and boosting gender equity.

Nabeela aspires to be an advocate for important issues such as healthcare, education, taxes, and equal rights.