Mehul Choksi Could be Extradited To India 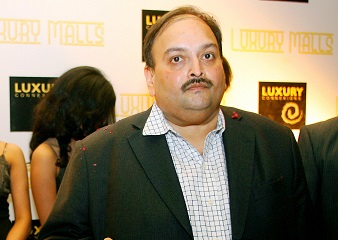 ABSCONDING diamond merchant Mehul Choksi’s citizenship of Antigua may be revoked by the Caribbean country and he could be extradited to India after he exhausts all legal options, prime minister Gaston Browne was quoted as saying by a media report.

Choksi, 60, had taken the nationality of Antigua and Barbuda in November 2017 using Citizenship by Investment Program (CIP) of the twin-island nation.

He fled India in the first week of January last year, days before scam worth Rs 134 billion was detected and reported by state-run Punjab National Bank (PNB).

Choksi, promoter of Gitanjali Gems, and his nephew Nirav Modi, who is currently in a London jail, are wanted by the Indian probe agencies, Enforcement Directorate (ED) and the Central Bureau of Investigation (CBI) for allegedly masterminding the biggest banking fraud of India.

Prime minister Browne said the citizenship of the billionaire diamond trader will be revoked by the Caribbean country after he exhausts all his legal options.

“His (Choksi) citizenship was processed; he got through but the reality is his citizenship will be revoked and he will be repatriated to India; so there is recourse. It’s not a case that we are trying to provide any safe harbour for criminals, for those who are involved in financial crimes,” he was quoted as saying by the Antigua Observer Monday (24).

“We have to allow for due process. He has a matter before the court and as we said to the Indian Government, criminals have fundamental rights, too, and Choksi has a right to go to court and defend his position. But I can assure you, after he has exhausted all of his legal options, he will be extradited,” he said.

Under the CIP, a person can take Antigua Barbuda passport on a minimum investment of $100,000 in the NDF investment fund in that country.

Sources in New Delhi on Tuesday said, “We continue to remain engaged with the Antigua and Barbuda authorities over the issue of Choksi’s extradition.”

The CBI has managed to get a Red Corner Notice against Modi but its application to get a similar notice from Interpol against Choksi has met a deadlock at the Lyon-based international police cooperation group.

The ED recently told the Bombay High Court that it was ready to provide an air ambulance to bring Choksi to India.

Choksi, currently based in the Caribbean nation of Antigua and Barbuda, told the high court that he left India for medical treatment and not to avoid prosecution in the case. He said he would return to India as soon as he is medically fit to travel.

He had escaped the country on January 4 last year on an Indian passport and took the oath of allegiance in Antigua on January 15, they said.

Choksi allegedly swindled Rs 70.81bn while remaining was siphoned off by his nephew Modi making it possibly the biggest banking scam in the country.

They managed to orchestrate the scam by availing credit from overseas branches of Indian banks on the basis of fraudulent guarantees in the form of Letter of Undertakings and letters of credit issued by PNB Brady House branch in Mumbai.

The LoU instructions were issued by colluding bank employees using an international banking messaging system but these were not entered in the internal PNB system making them impossible to be monitored.

An LoU is a guarantee given by an issuing bank to Indian banks having branches abroad to grant short-term credit to the applicant.

The non-repayment of these credits brought the liability on the PNB, the officials said.