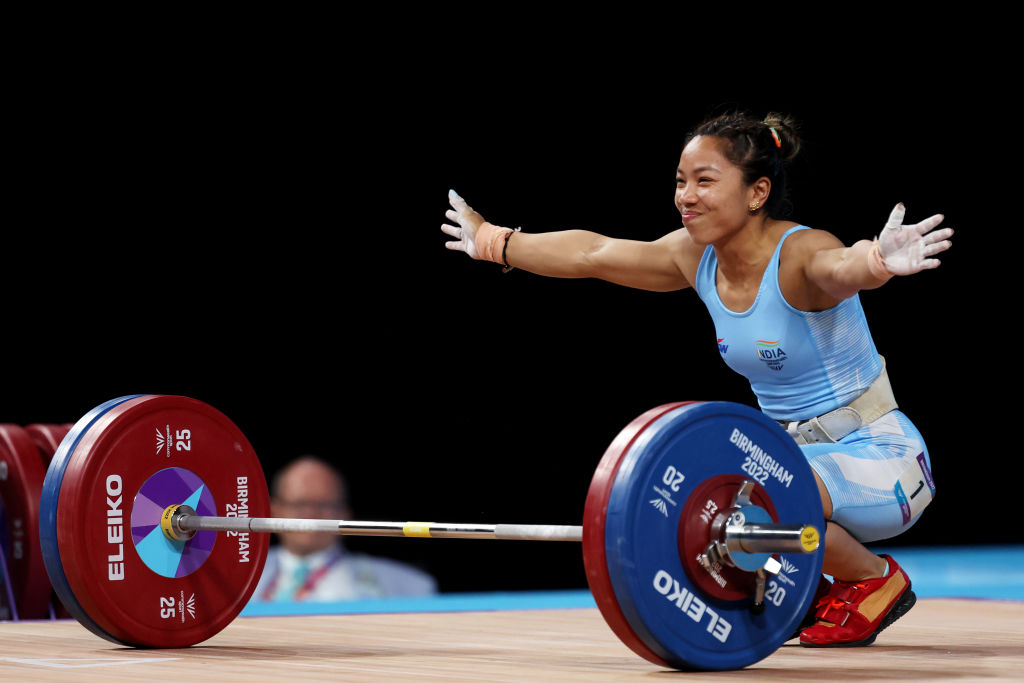 India’s Mirabai Chanu reacts after performing a clean & jerk during the Women’s Weightlifting 49kg Final on day two of the Birmingham 2022 Commonwealth Games at NEC Arena in Birmingham, UK, on July 30, 2022. (Photo by Clive Brunskill/Getty Images)

MIRABAI Chanu bossed the 49 kilogram (kg) field as expected to defend her Commonwealth Games title and give India the first gold medal of the Birmingham edition in Birmingham, UK, on Saturday (30).

The Olympic silver medallist aggregated a total of 201kg (88kg + 113kg) to stamp her authority in the competition and achieve a Commonwealth Games record in the process.

An overwhelming favourite in her weight category, the 27-year-old Chanu set a rather low starting weight for 80kg in snatch and 105 in clean and jerk before changing her first attempt to 84kg. Going into the competition, she had a personal best of 88kg and 119kg, a world record in clean and jerk, totalling 207kg.

Her nearest rival in the field, Stella Kingsley of Nigeria, came into the contest with a personal best of 168kg (72kg+96kg), summing up the gulf between her and the rest.

The atmosphere at the NEC arena was electric, pushing the athletes to give their best with the music keeping the fans entertained.

As the MC also pointed out, with Chanu head and shoulders above others, the outing was more about competing with herself than her opponents.

Chanu’s first attempt in snatch was comfortable before she lifted 88kg in the second before leaving 90kg for the third and final attempt. She was not able to record a new personal best but still went into the clean and jerk with a 12kg advantage over Ranaivosoa.

The clean and jerk began on a rather dramatic fashion with Bangladesh’s Marija Akhter falling on the floor after a failed attempt for 70kg.

With her nearest rivals attempting 15kgs less than Chanu, the result was a foregone conclusion.

The battle for silver and bronze went down to the wire with Kingsley, Kaminski and Ranaivosa battling it out.

It was a heartbreaking end for the Nigerian lifter Kingsley whose 98kg attempt was declared as a no lift following a premature celebration. Chanu lifted 109kg comfortably in her first attempt before going for 113kg in the second.

She did not risk matching her world record of 119kg and went for 115 kg in her final lift, but missed.

“The exceptional @mirabai_chanu makes India proud once again! Every Indian is delighted that she’s won a Gold and set a new Commonwealth record at the Birmingham Games. Her success inspires several Indians, especially budding athletes,” he tweeted.

India were at No.4 in the medal tally list at the end of the second day with one gold, two silvers and one bronze. Australia were leading with 10 golds, five silvers and six bronzes. All of India’s medals till now have come in weightlifting with Bindyarani Devi winning a silver in women’s 55 kg, Sanket Sargar silver in men’s 55 kg and Gururaja Poojary bronze in men’s 61 kg to accompany Chanu.