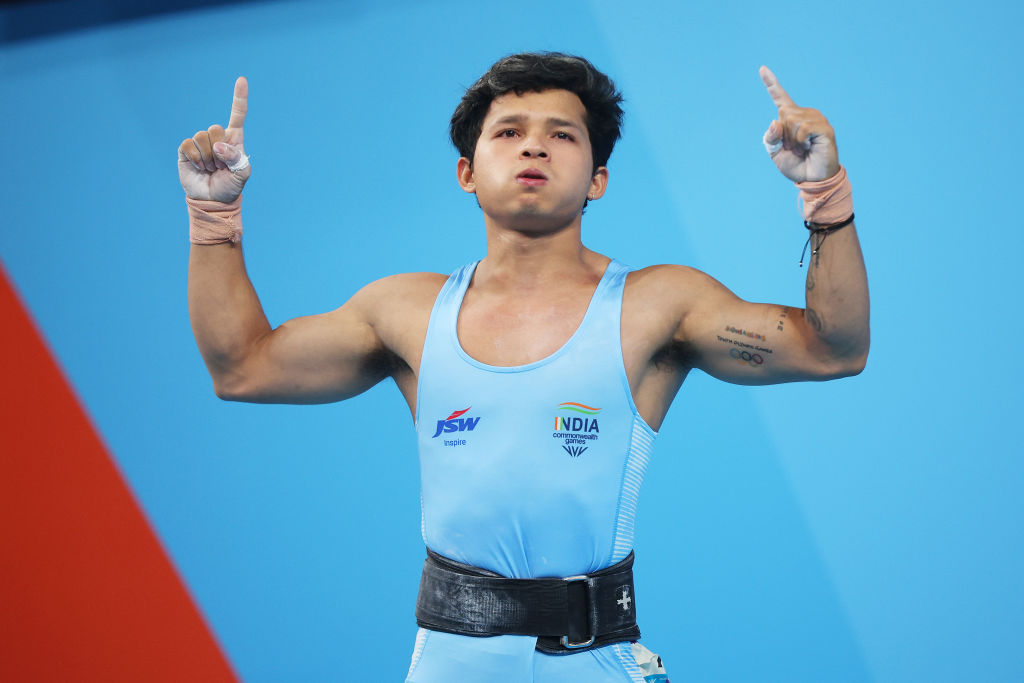 Jeremy Lalrinnunga of Team India reacts after performing a snatch during Men’s 67kg Final on day three of the Birmingham 2022 Commonwealth Games at NEC Arena on July 31, 2022 on the Birmingham, England. (Photo by Eddie Keogh/Getty Images)

INDIA’s teen weightlifter Jeremy Lalrinnunga on Sunday (31) created history by winning a gold medal with a record-smashing combined lift of 300 kilograms (kg) in the men’s 67 kg final at the ongoing Commonwealth Games 2022 in Birmingham, the UK. Nigeria’s Edidiong Joseph Umaoafia won the silver with 130 kg and Samoa’s Vaipave Ioane won bronze with 127 kg.

It was India’s second gold medal at the marquee tournament after Olympic medallist Mirabai Chanu’s top medal clinched in the same category on Saturday (30) and the fifth medal overall. India are currently at No.6 in the medal tally with two golds, two silvers and one bronze — all of which have come in weightlifting. Australia are leading the table with 13 golds, nine silvers and 12 bronzes.

Lalrinnunga, who hails from the north-eastern Indian state of Mizoram, has achieved a record-breaking 140 kg lift in the snatch category and 160 kg in the clean and jerk category. He also tried to better his record by going for 143 kg in his final attempt but was unsuccessful.

Indian president Droupadi Murmu praised Lalrinnunga in a tweet, saying, “Congratulations, Jeremy Lalrinnunga for winning gold in Weightlifting at #CommonwealthGames. Your self-belief despite injury during the event enabled you to create history & inspire millions. Your podium finish has filled Indians with pride. Wishing you more such moments of glory.”

Indian prime minister Narendra Modi also congratulated the young weightlifter on his feat and said it was a success of the country’s ‘Yuva Shakti’ (youth force). “Our Yuva Shakti is creating history! Congratulations to @raltejeremy, who has won a Gold in his very first CWG and has set a phenomenal CWG record as well. At a young age he’s brought immense pride and glory. Best wishes to him for his future endeavours” he tweeted.

Who is Jeremy Lalrinnunga?

The gold won at the Commonwealth Games 2022 was not the first time that Lalrinnunga won the top medal at an international event. In 2018, he won the gold as the first Indian in Youth Olympics which was held in Buenos Aires, Argentina. He had a couple of foul attempts but never the lad, only 15 then, showed any sign of panic and went on to register history.

“My family told me about the YouTube stream problem but they did watch me win the medal. I am very proud that I could win the first gold medal for India. I was confident that I will win the competition. I didn’t think about medals or records and my coach said just go out there and enjoy,” Lalrinnunga was quoted as saying by Scroll.

The youngster, who is from Aizwal, Mizoram, has learnt to be carefree from his upbringing. His father was a boxer at the national level and a champion at the junior national level. Being the son of a sportsperson, Lalrinnunga was always encourage to pursue sports. One among five brothers, he accompanied his father for boxing training and soon started training himself.

While Lalrinnunga took up boxing initially, he later got attracted towards weighlifting. He saw his friends training for weightlifting at a camp in his native and thought it would add to his strength and that he needed to do it. It was the beginning of his journey as a weightlifter.

The young sportsperson says he is a fun-loving person but he is a serious competitor when it comes to business. He won silver in the 56kg category at the World Youth Championship in 2016 and followed it up with a number of medals till he grabbed that gold in Argentina.

He also won a gold in the 67 kg category at the Commonwealth Weightlifting Championships in Tashkent, Uzbekistan, in December last year.

Lalrinnunga missed out on qualification for Tokyo Olympics last year.