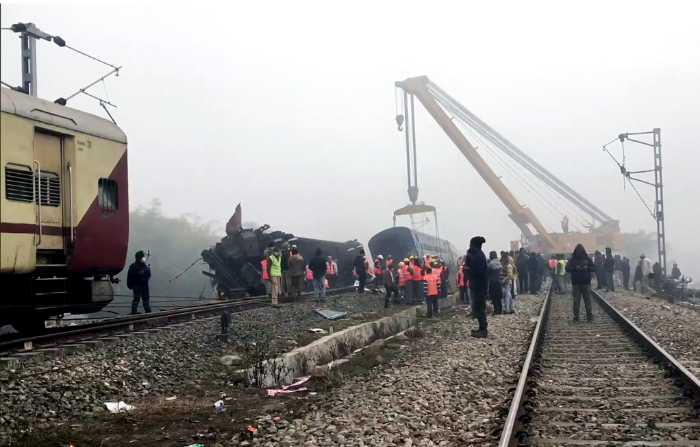 A PASSENGER train got derailed in the eastern Indian state of West Bengal on Thursday (13) evening, resulting in the death of nine and injury to many.

Twelve coaches of the train, which was going to Guwahati in the north-eastern state of Assam from Bikaner in the western state of Rajasthan, got derailed in Moynaguri region of northern Bengal around 5 pm local time.

Moumita Godara Basu, the magistrate of Jalpaiguri district where Maynaguri is located, initially said five bodies were found till the latest reports came in and more than 20 injured passengers were taken to a local government hospital for treatment. Conditions of 15 of them were said to be critical. The death toll later rose to nine while 36 were injured.

A special train reached the accident site, around 7 pm to take the injured to hospital.

A railway spokesperson said of the 12 coaches that got derailed, two capsized in a nearby waterbody.

The daylight faded fast as the initial team of rescue workers reached the site. Generators were used to light up the area to carry out the rescue operations.

The Indian Railways ordered a high-level investigation into the accident.

Images from the accident site showed one of the coaches getting above another, resulting in serious damage to both.

Authorities said that there were not too many passengers in the train due to the Covid-induced restrictions. However, having said that, they also kept their fingers crossed over the death toll.

Bengal chief minister Mamata Banerjee said in a tweet that senior officials of her government were supervising the rescue and relief operations.

“Deeply concerned to hear about the tragic accident of the Bikaner-Guwahati Express in Maynaguri,” she said on Twitter, adding that the injured will receive fast medical attention.

Deeply concerned to hear about the tragic accident of the Bikaner-Guwahati Express in Maynaguri.
Senior Officers of the State Government, DM/SP/IG North Bengal are supervising rescue and relief operations. Those injured will receive medical attention, as early as possible.

Situation being closely monitored from the State HQs.

Bengal government officials said Banerjee was at a meeting chaired by prime minister Narendra Modi via video conference on the pandemic situation in the country when she learned about the accident.

Modi also spoke on the matter. In a tweet, he said he spoke to railways minister Ashwini Vaishnaw, condoled the deaths and wished those injured a speedy recovery.

Spoke to Railways Minister Shri @AshwiniVaishnaw and took stock of the situation in the wake of the train accident in West Bengal. My thoughts are with the bereaved families. May the injured recover quickly.

Indian Railways announced an ex-gratia of ₹5 lakh for those who died in the accident and ₹1 lakh for those severely injured and ₹25,000 for those with minor injuries, Asian News International reported.