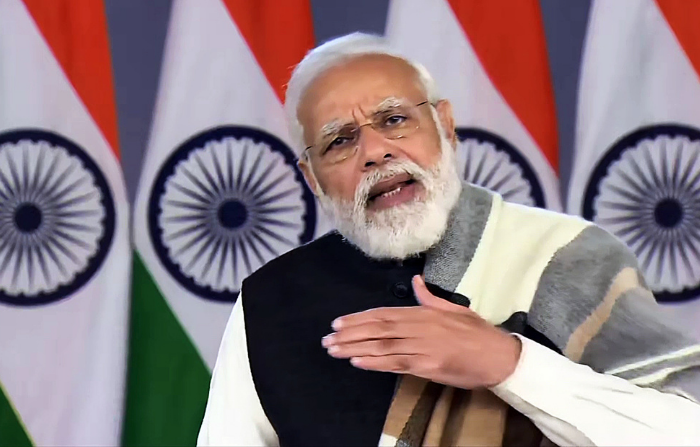 INDIAN prime minister Narendra Modi on Thursday (20) said an India whose thinking and approach are new and decisions progressive is emerging. Speaking at an event, he said that a system is being created in which there is no place for any discrimination.

Delivering the keynote address at the national launching ceremony of ‘Azadi Ke Amrit Mahotsav se Swarnim Bharat Ke Ore’ virtually, Modi said that one’s progress is aligned with the nation’s progress and stressed the need for giving importance to one’s duties for the country’s rise.

I would like to appreciate the @BrahmaKumaris family for undertaking innovative activities as a part of ‘Azadi Ka Amrit Mahotsav.’

Such collective efforts will strengthen the resolve for national regeneration. pic.twitter.com/0wDOUfiUze

“We also have to admit that in the 75 years after Independence, a malaise has afflicted our society, our nation and us all. The malaise is that we turned away from our duties and did not give them primacy,” Modi said, while launching year-long initiatives dedicated to ‘Azadi Ka Amrit Mahotsav‘ by the Brahma Kumaris, which include more than 30 campaigns and over 15,000 programmes and events.

Azadi Ke Amrit Mahotsav is an initiative of the Indian government to celebrate and commemorate 75 years of the country’s independence.

People only spoke of their rights all these years and fought for them, the prime minister said, adding that speaking of rights may be right to some extent in certain circumstances.

But forgetting one’s duties completely has played a big role in keeping India weak, Modi said and called for everyone to work together to discharge their duties that will remove social ills and take India to new heights.

He also requested organisations such as Brahma Kumaris with international presence to work to present the right picture of India abroad and dispel rumours being spread about it.

“You all have been witness to various efforts being made to malign India’s image. A lot of it goes on at the international level too. We cannot wash our hands of by saying this is all politics. This is not about politics but about our country,” Modi said.

In his speech, he said a society is being built that stands firmly on the foundation of equality and social justice.

“We are witnessing the emergence of an India whose thinking and approach are new, and decisions progressive,” Modi said.

Our progress lies in the progress of the nation, he said.

The coming 25 years are of hard work, sacrifice, austerity and penance, he said, adding this period of 25 years is one to get back what our society has lost in hundreds of years of slavery.

Brahma Kumaris is a worldwide spiritual movement dedicated to personal transformation and world renewal. Founded in India in 1937, Brahma Kumari movement has spread to more than 130 nations.