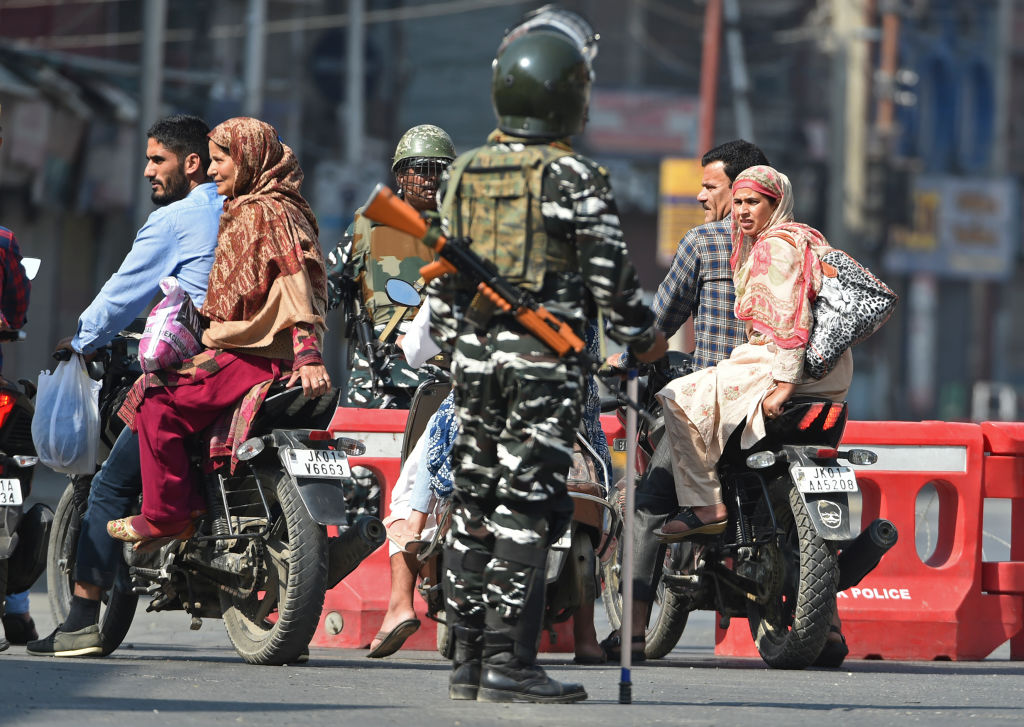 Indian paramilitary troopers stop motorcyclists during a strict curfew in Lal Chowk area of Srinagar in Jammu and Kashmir. (Photo by TAUSEEF MUSTAFA/AFP via Getty Images)

A LAW firm in London, the UK, has filed an application with British police earlier this week seeking the arrest of the Indian Army chief and a senior minister of the Indian government over their alleged roles in war crimes in Jammu and Kashmir.

The Indian authorities and a number of media outlets called it a Pakistan-backed exercise.

The firm’s 41-page report titled ‘India’s war crimes in Kashmir’ is based on more than 2,000 testimonies received between 2020 and 2021, the report said. It also accused eight unidentified senior Indian military officials of direct involvement in war crimes and torture in Kashmir, a province over which India and Pakistan have fought a number of wars since their independence in 1947.

I am proud of my colleagues at @swiunit @stoke_white who worked arduously to put this investigation, case and report together. #India #WarCrimes #Kashmir https://t.co/7wuZjDtFDq

Neither India’s external affairs nor home affairs ministry remarked on the issue.

“There is strong reason to believe that Indian authorities are conducting war crimes and other violence against civilians in Jammu and Kashmir,” the law firm’s report said.

The request to law-keepers in London was made under the principle of “universal jurisdiction” which gives countries the authority to prosecute individuals accused of crimes against humanity carried out anywhere in the world.

The law firm said it believed its applications constituted the first occasion when legal action has been initiated against Indian authorities over alleged war crimes in Kashmir.

Hakan Camuz, director of Stoke White, said he hoped the report would convince British police to launch an investigation and eventually arrest the officials when they set foot in the UK. Some of the Indian officials have financial and other links to the UK.
“We are asking the U.K. government to do their duty and investigate and arrest them for what they did based on the evidence we supplied to them. We want them to be held accountable,” Camuz said.

The police application was made on behalf of the family of Zia Mustafa, a resident of Pakistan-occupied Kashmir whom the London firm said was the victim of an extrajudicial killing by Indian forces in 2021 and on behalf of human rights campaigner Muhammad Ahsan Untoo, who was allegedly tortured before getting arrested last week.

In 2018, the United Nations human rights chief called for an independent international investigation into reports of rights violations in Kashmir, alleging “chronic impunity for violations committed by security forces”.

Tension in Kashmir has increased since August 2019 when the Narendra Modi government revoked Article 370 and Article 35A of the Indian Constitution that gave Kashmir a special status.

It also called militant groups such as Jaish-e-Mohammed and Lashkar-e-Taiba as “non-state armed groups” and did not mention that they have offices in Pakistan.

The Indian government has denied the alleged rights violations and said such claims were separatist propaganda meant to hurt the Indian Army’s image in Kashmir.

Stoke White’s investigation suggested that the abuse in Kashmir has got worse during the coronavirus pandemic.

Its report also spoke about the arrest of Khurram Parvez, a prominent activist from Kashmir, by India’s counter-terrorism authorities in 2021.

Camuz hoped the request to British police seeking the arrest of Indian officials will be followed by other legal actions on Kashmir.
“We are sure this is not going to be the last one, there will probably be many more applications,” he said.

Stoke White has offices in Istanbul, Turkey, besides London and specialises in Islamic law and has strong Turkish connections.

Turkey has backed Pakistan’s position on Kashmir while New Delhi doesn’t support Istanbul’s position on Cyprus. A few years ago, India rubbished Turkey’s offer to mediate on Kashmir with Pakistan, saying it was a bilateral matter.

Last year, Stoke White filed a case against the United Arab Emirates and Saudi Arabia, accusing them of committing war crimes in Yemen. The Saudis have regional tensions with Turkey. Pakistan, on the other hand, has a good relation with Turkey and the latter is currently trying to project itself as the new Caliph in the region and has been accused of backing Pakistan’s bidding.